For the past couple of weeks I have been working on a secret quilt – it is to be a gift and I don’t want to spoil the surprise.  However, I can share part of the back- 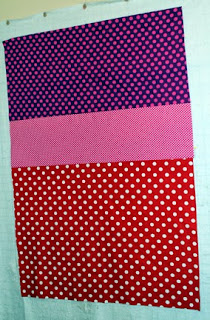 That’s half of it.  The back is all polka dots, with the exception of a small piece of what is on the front.  That is a LOT of polka dots, and it made me dizzy sewing it together.  I love polka dots and collected many, thinking I would someday do all dots, but after seeing a BOM quilt made from all dots, with only a white background fabric, I just couldn’t do it.  I found that this particular quilt was a good place to use many of them up, especially since I only used a couple on the front and a few on the back and they work well with the focal fabric.  It is now with Janet and I probably won’t get it back til sometime next month. I promised this person a quilt a long time ago and couldn’t decide what to make until inspiration finally hit me and now I can’t wait to give it to her.  This was also the first time I had to piece the batting together and it was a lot easier than I expected.

So I am in the mood to start <yet another> kaleidoscope wall hanging – I have a huge pile of fabrics set aside just for kaleidoscopes and I almost couldn’t make up my mind which to use.  But I finally decided on this one, which has been waiting for attention for a long time- 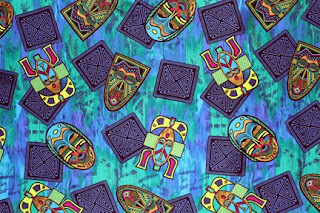 It’s actually a bit darker than this picture came out – very rich colors with bits of gold.  I only had 1 ½ yards of this, just enough for 4 repeats, so it will come out small.  I have already lined it all up and cut groups of 4 ½ “ squares and I feel like I’m not getting enough variation out of them, so I may have to add something in there.  Not sure what yet.  Going through the stash now to see what might work.

That’s it for now.  Thanks for stopping by.
Posted by Laura at 10:53 AM No comments:

Random Notions – May the Fourth be with You

The last couple of months have been brutal.  Not that I had a lot of stuff to do, it’s just that I am such a procrastinator, I drug my feet constantly. I was in such a funk, I could not raise myself from the near-dead. Yesterday I turned in the last paper due for my winter semester classes – I probably could have had it done a long time ago.  It wasn’t even very hard.  I just didn’t want to do it.  But it’s done and now I have summer free from school work.

One bad thing happened a couple of weeks ago – my credit card got hacked.  Someone had a joy ride shopping at some high end stores – Hermes, Saks, and Yves St. Laurent, plus a couple of nice meals at a couple of expensive restaurants, all to the tune of $2500.  My bank account was frozen for 2 weeks and I had to go in to beg for bits of what little money I did have so I could pay a couple of bills and buy gas.  I hope the idiots had fun.

But there was a silver lining to that black cloud.  Saturday, my account was unfrozen and I got a little spending money out of the ATM - it took me a minute to remember my pin and $20 seemed like so much after the last couple of weeks!

I went to a yard sale that had advertised some sewing stuff – I got there after 12 and they had started at 8 so I figured the sewing stuff would all be gone.  But it wasn’t!  I was so excited about a rolling storage container full of stuff until I saw a price tag on top that said $40.00 firm.  I glanced through the drawers and got sadder as it looked like there was come cool stuff in there.  The lady came over and I told her I would love to have it but I didn’t have that much.  She said, “Well, I suppose I could go as low as $20.”  OMG - I could not get the $20 out of my purse fast enough!  I barely said thank you and was rolling it off to my car before she could change her mind! 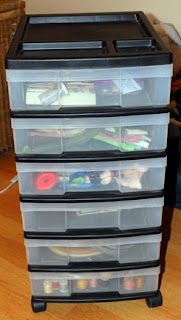 Okay, so you may be asking, what could possibly be in this thing to cause so much excitement for me?  Well, first off, I had never seen one of these storage things with this nifty top- 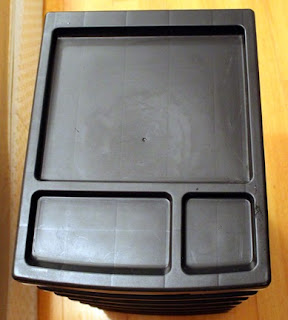 That is fabulous – all the ones I have, about 5 of them, are flat!

So then I started going through the drawers.  There were loads of crochet hooks, including some bone ones- 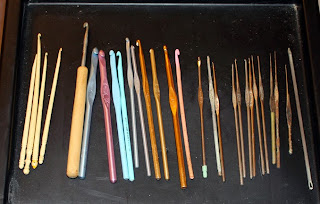 A few of the metal ones are rusty, but I will try to clean those off.  The ones on the right, with that long needle-y thing – 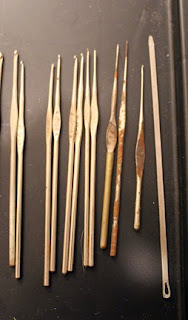 the hooks are SO tiny!  I thought maybe one of them would be good for pulling threads out of tight places.  There was also a set in a pouch– 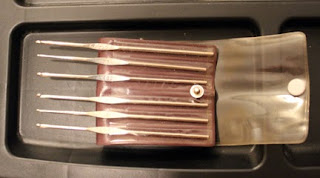 I don’t crochet even though I know how – the yarns make my hands itch – but my mom does, so she will enjoy having most of them.

Then, along with all the hooks, all of this came out – 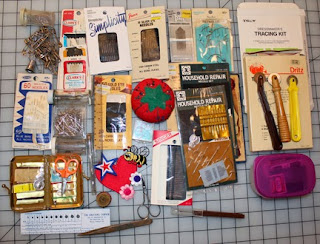 There are so many packages of sewing needles, I will never run out for my entire life.  Whoever gets all my treasures after I die will not run out for their entire life – and maybe several lives down the line.  There is a little sewing kit down at the bottom left that still has the paper tape measure in it.  The round thing under the little appliques (Heart, bee, flowers, star) is another tape measure that I am almost afraid to unwind.  The box at the lower right held many more treasures- 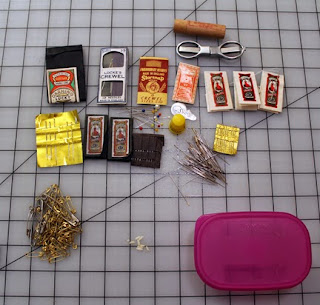 That small pile of white between the safety pins and the pink box is a few grains of rice - there was less rusting in this small box than in the rest of the drawers so I guess it works.  More needles in original packages – you can’t buy packages like that anymore!  I had to take a picture of the back of a couple of those packages- 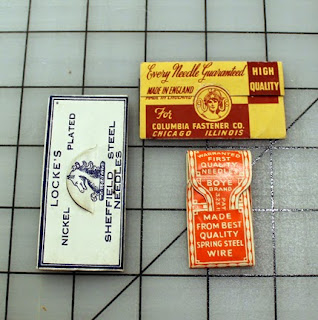 In this drawer was also another needle package, but it was empty.  It’s very cool though- 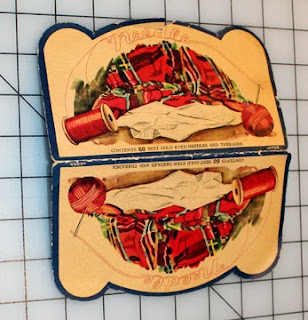 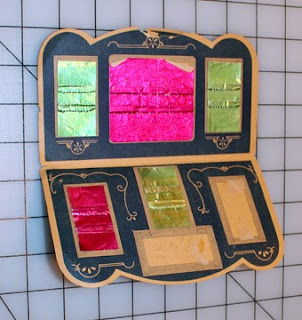 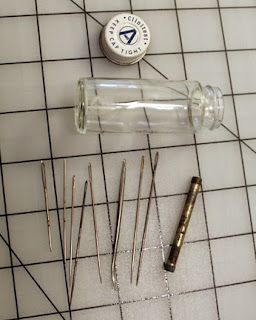 It also had this nifty little tool in it, which kind of looks like a leather working tool to me – 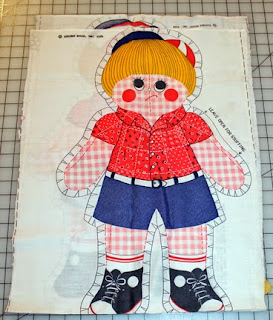 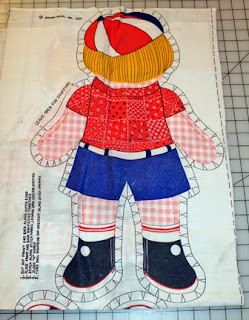 This is a stamped cross stitch panel someone started and a couple of small patterns – the first is in an envelope marked “Baby Soft Sounds Coat Pattern” and it complete with the instructions, but I can’t find a date – it was apparently a Fisher-Price doll.  I haven’t unwrapped the other yet because it seems kind of brittle, but I think it is another doll clothing pattern. 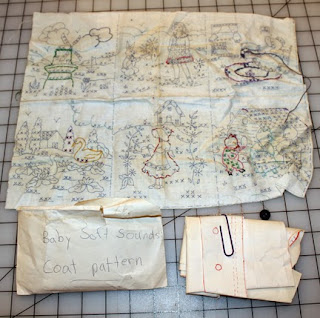 Moving on, I found zippers – all but one metal – in another drawer.  I love metal zippers and my pile was getting a little low. 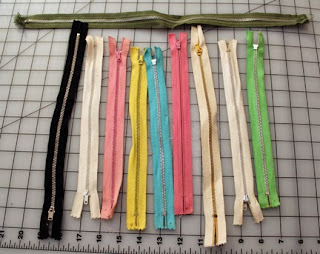 Then a couple of patterns – I will have to check them for dates, but the Butterick pattern had a printed price of $1.25 and the McCall’s was $2.00 – who remembers pattern prices like that? 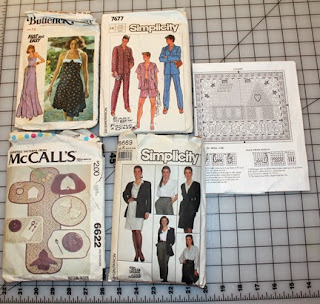 In this drawer was also that pattern to the right, which I found the started project in a later drawer.

As I was setting the camera down after that last picture, it took a picture on its own.  I was very surprised that it took a great picture of my “helper” Max- 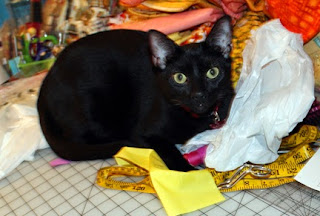 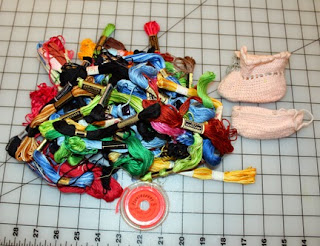 Those pink things to the right are a pair of baby booties - one finished, one not.  That made me sad.

With the embroidery floss was a crewel project someone had started, still in the hoop, with the instructions- 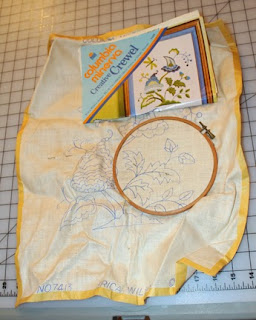 I don’t do crewel but I do regular embroidery, so maybe that is something I will work on in the future.  I took the hoop off and put it with what I found in another drawer towards the bottom- 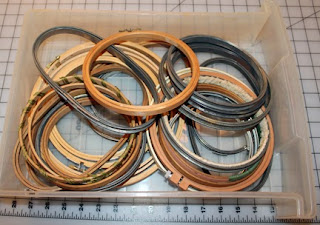 Next up was some embroidery transfers- 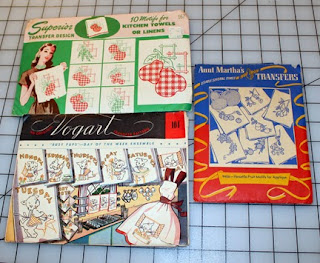 I love those things – I think they are so much fun.  I am going to try to get Layla to embroider some with me this summer!  There was also a stamped cross stitch kit and an old magazine- 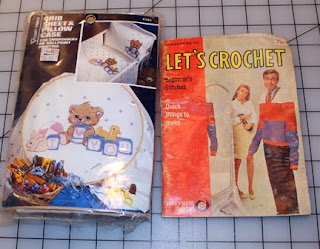 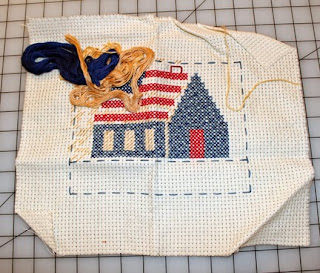 Okay this left me with the very last drawer that got me SOOOO excited.  First off, there was some thread – some on those old Styrofoam spools- 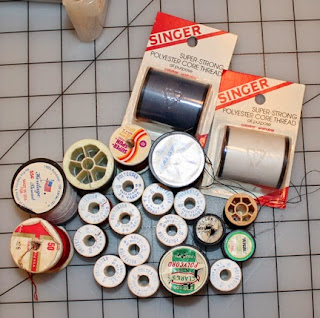 That’s not so exciting, right?  But take a look at these- 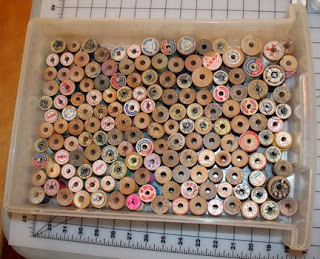 I LOVE WOODEN SPOOLS!  I already have a couple but I nearly fainted when I saw all those!  I am going to have to be very careful taking all of them out as some of them have needles still pushed into them.

This rolling cart was well worth the $20 and it really perked me up.  I am very grateful to the lady having a yard sale that wanted to get rid of it all and hope she knows that it has gone to a very happy home!  <happy dance>

Okay, other news – one of my most favorite people in the world is leaving town – she is the lady who has cut my hair for the last 10 years - at least.  I am so sad she is going – it took me years to find her – before her, I never let the same person cut my hair twice.  (And of course, it’s always all about me!)  Linda, I am so going to miss you and wish you all the best!!

I got the Scrappy Batik Stars and the small kaleidoscope quilts back from Janet the Longarm Lady.  I put the binding around the small one already – 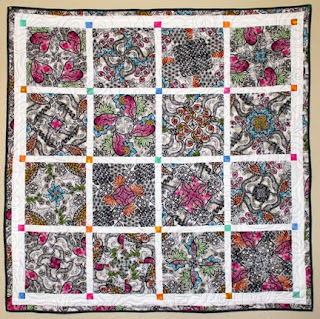 I have the binding sewn to the front of the stars quilt, I just have to hand sew it to the back.  Gonna try to get started on that in the next couple of days.

That’s it for now.  Happy Star Wars Day to those celebrating!

Thanks for stopping by!
Posted by Laura at 3:37 PM 2 comments: