The batik stars are with Janet the longarm lady now. I don’t have a picture of the entire top together because I had nowhere to hang it to get the whole thing in the picture.  I didn’t want to lay it on the bed because of cat issues – I know Janet has allergies and I didn’t want to add to what was already on the quilt top.  I try very hard to keep cats out of the sewing area, but even though I close the door, I have a little friend (Harry) who is constantly opening it.

It took me forever to get the back put together.  I pieced the entire thing, so it’s kind of a quilt unto itself.  After adding the extra inches, I knew I wouldn’t be able to just piece it all at once, so I divided it into quarters and then put them together.  Here is a pic of just one of the quarters – 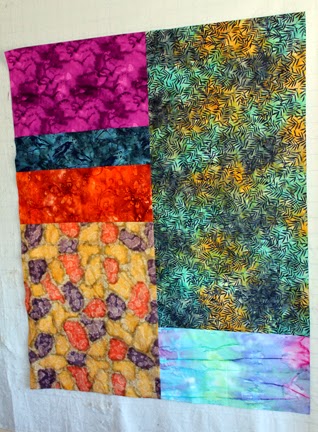 Believe it or not, I still have a nearly full tub of batik fabrics, in addition to all the charm squares.  Need to find something good to do with them all.  I think I will use some of them to make some pillow covers to match the quilts.

For the next couple of weeks I will be making the binding – which will be white, but it means I will have to put a lot of pieces together.  It would be nice to have it all together and ready by the time I get the quilt back, and I probably have until the beginning of April because Janet was pretty booked up.  That’s good – I’m sure I will need the time.

The next big project I will be tackling will be mainly pink, of which I am not a big fan, but it will be for a special little girl I have been meaning to make something for quite some time.  Layla may be helping me on that one.

That’s all for now.  Thanks for stopping by!
Posted by Laura at 11:26 AM No comments:

Random Notions – Not Much to Say, Except…

...the side borders are on! 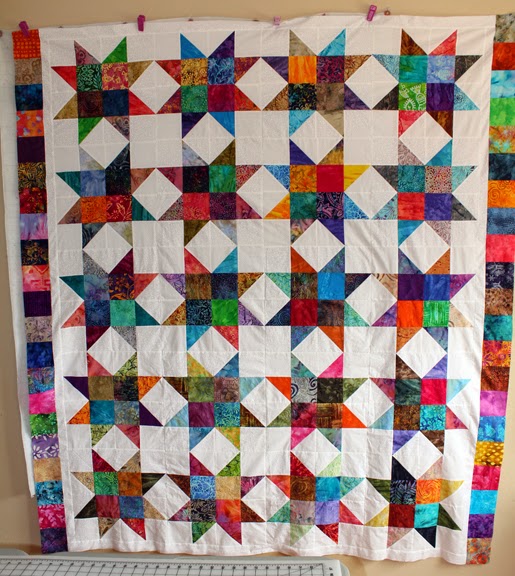 I like this so much better than my first idea of having a wide white border. And I was very relieved that the squares worked out evenly down the sides, since I didn't do any mathematical figuring before I got started and just played it by ear.  However, the top and border are going to require cutting one square in half which I will put in the middle because they won't work out evenly.

This is the biggest quilt top I have made yet.  So big I couldn’t get it all into the frame for the picture.  But it would help if I had a better place to hang it to get a picture straight on instead of at an angle.

Hope to get the top and bottom borders on in the next two days and start piecing the back – it’s been so long since I saw Janet the longarm quilter I’m afraid she won’t remember who I am!