I was thinking about New Year’s resolutions, and since I was successful with one for once, I decided to try another.  I finally decided that no matter what, I am going to sew every day, even if it’s only for 15 or 20 minutes.  I am tired of telling myself I can’t sew til I get something else finished, and I am such a terrible procrastinator.  So now, I am going to do something every day, probably first thing in the morning, and take a picture of whatever I do, just so I will have 365 pictures to make a collage next year!  LOL

Classes start tomorrow so I have been sewing like crazy since last weekend.  It was so nice to sew guilt free – not worrying about school work that needed to be done.  Here is the finished wall hanging top I made with the floral I wrote about last week – 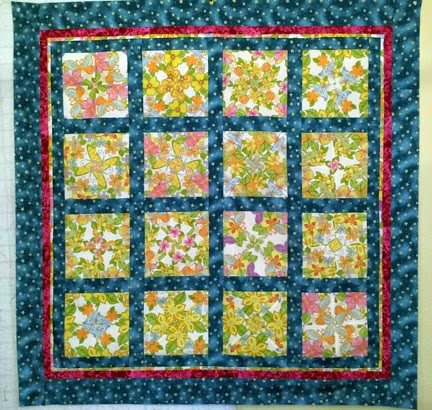 My mother and daughter didn’t like the dark pink border I stuck in there, but I do.  I guess it’s true that you can’t please everyone all the time.

The same day I finished that, I pulled out another fabric I wanted to make kaleidoscope blocks with – 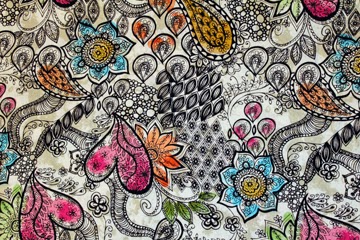 I love how this fabric looks like someone has water colored on it.  It made really fabulous 4 piece blocks – 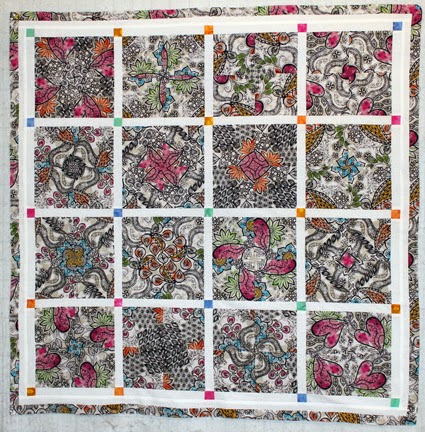 Both of these wall hangings turned out approximately 50” square.  There was practically nothing left from either piece of fabric.  I love using up what I have!

So then I was looking around for something else to work on.  I turned to the four charm packs of batiks I had bought a few months ago- 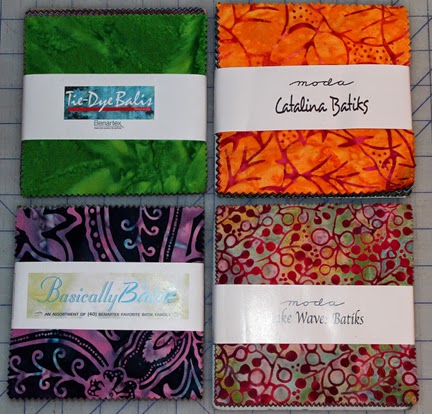 I had gotten 4 packs because I had an idea in mind for them, that after thinking long and hard about them, I decided I didn’t think I would like it.  So for quite some time, I have been looking for something to do with them.  Earlier this week I was looking through a quilting book and I saw a star – just a plain old star – that I started thinking I might like done in batiks.  So I set about doing it.

It was so hard for me to get started - I finally figured out that even though I like the scrappy look, I have always tried to make things match or go together.  I never thought I could make something look as good as what I see other people do with lots of different fabrics.  I was actually trying to match up colors as I was pulling charms for each star.  I was being fussy and saying “no, that looks wrong” until I finally figured out that in scrappy, there is NO wrong.  You just have to let it go and do it.  And when you do finally let go, it is such a freeing experience.  I really like what I have so far - 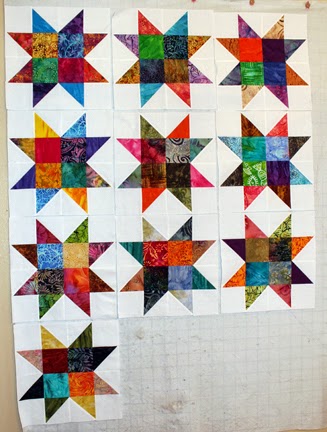 I suppose if I was going to really completely let it go, I would have made all the triangle squares and then mixed them up, but I did stick to using both halves on the same block, just making them opposite each other.  Maybe next time – baby steps, right?

I have enough charms to make 20 blocks, but the white background I was using – I didn’t have as much of it as I thought I did.  Of course, it’s something I got a very long time ago and I can’t find it again, so I had to get another piece of white.  I keep saying, hey it will add to the scrappy thing.  I figured I would make the other 10 blocks with it and alternate them.  It’s okay – I am only making it for myself.  I have never had any interest in any kind of competition quilting, so I only have to please me.

The blocks will finish at just under 16”, so I think 5 by 4 rows will make a nice size bed quilt after all the sashings and borders.

I didn’t sleep well last night, and it finally occurred to me why.  Last week I mentioned that I had stayed away from Starbucks for a year – and I did make it through that last day.  But I had a $5 gift card and while I was out yesterday, I thought I would use it.  So I went through the drive-thru and saw the sign for the new Flat White drink they are making.  I figured since I wasn’t paying for it, I would give it a try.  My first couple of sips were like – wow, this is the strongest coffee I have ever experienced - I wasn’t sure if I liked it or not.  But I kept drinking it.  By the end, I decided, yeah, I could drink this again.  However I was not thinking about the fact that it was already after 3 in the afternoon!  So I bring this up to let you know – if you decide to try a Flat White, do so very early in the morning!

Hope you have had a great start to your New Year!  Thanks for stopping by!
Posted by Laura at 8:28 PM