It has been so hot the last couple of months, I could not bring myself to sit in front of the computer because the room was too hot.  Today we got rain – beautiful rain with thunder-boomies and lightening – and it looks like we could get some more.  This makes me a very happy camper!  Right now, my clock says its 75º outside and inside 83º.  I’m opening the windows!

Even though I haven’t been here, I have had a bit of activity going on.  Just have to remember what it was.

Got the Dream Garden back from Janet the longarmer – I love it! 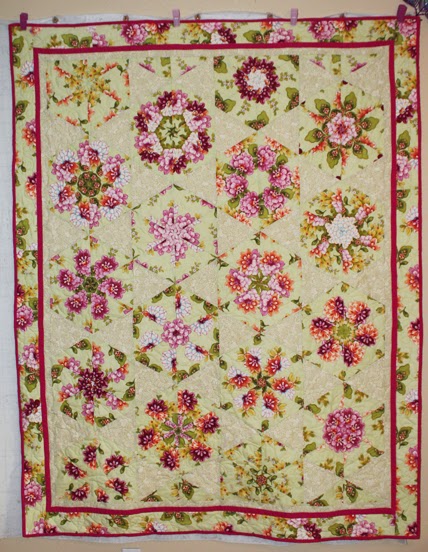 The more I look at it, I keep thinking I probably should have used a darker background between the kaleidoscopes, but it is still fabulous.  The back, well, maybe fabulous is not the word – 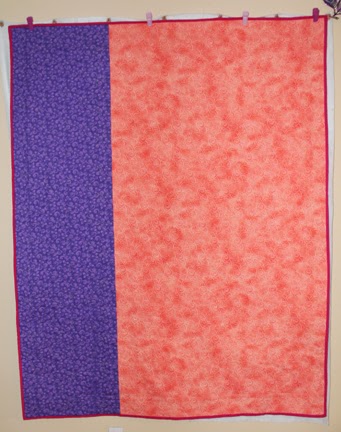 I was in a big hurry when I pieced it to get it to Janet quickly and had to pull out what I had enough of.  Had I of been thinking right, I would have probably put the purple in the middle between 2 strips of the coral color.  It’s okay, both are swirly fabrics and I love them.  My girls also love it.

Layla’s Irish Chain has come back from Janet as well, I just haven’t had a chance to get the binding on it.  We backed it in flannels, pink and purple, and I was thinking right that time, I made it look even.  She and I have been working on a top secret project that we got to Janet very quickly – I will reveal that after it has been given to the lucky person but it will be awhile.

Harry’s I Spy quilt is off to Janet and should be back before the end of the month.  I pieced the back with different space/alien fabrics – I thought they were cute.

I started working on Layla’s wall hanging.  There was the cutest block in the newest issue of Quiltmaker’s 100 Quilt Blocks; I think issue #9.  It’s an appliqued prom dress.  I decided to make 3 of the blocks and hang them vertically.  This is as far as I have gotten – 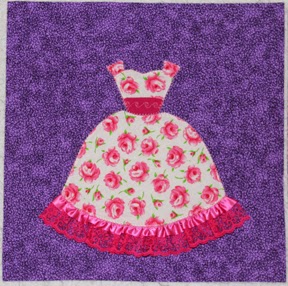 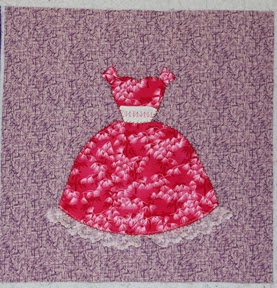 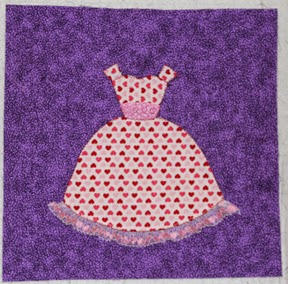 The pattern in the magazine has a hanger in the dress – I am thinking about embroidering one because I didn’t like how the appliqued one looked.  Not really sure I like the center dress background – still thinking about it.  They still need to be trimmed to center the dresses – maybe I will like that background better if there is less of it.

Since we got Max I had wanted to make some cat toys.  I saw the video Missouri Star Quilt Company did on the rooster pincushion, and thought it would work well for a toy.  I had to make a couple of them to figure out the right size squares to work with, and finally figured out 2 ½” was perfect.  Before stuffing them with fiberfill, I put a bunch of cat nip in, and Max loves it.  I found that with such a small piece to fill, rolling a piece of paper into a tube made it really easy to get the cat nip in without any spillage.  This picture is actually one made of 4” squares but was still pretty popular in the house – 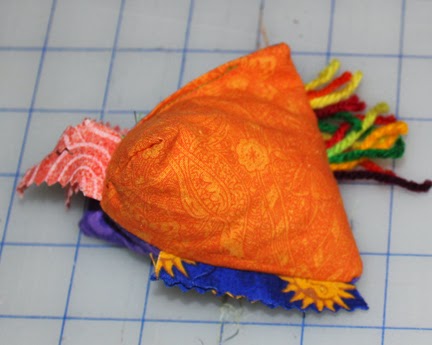 The cats are finding them fun to carry all around.  I need to make more.

Layla wanted to start making placemats for the family and started with one for Harry.  She sewed it – 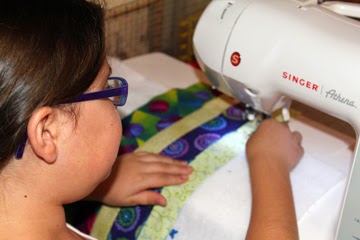 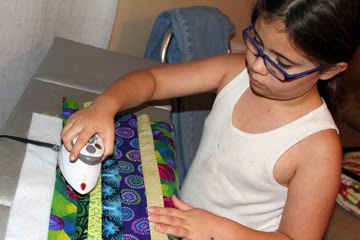 And I put on the initial applique, back, and binding for her – 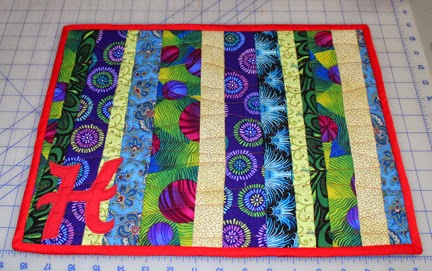 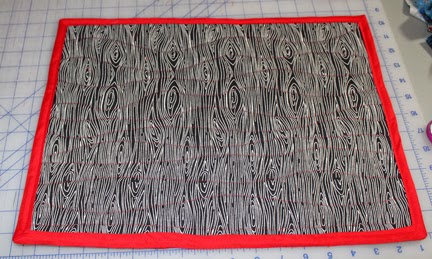 It really came out cute, but we had gotten started too late in the summer – she went back to school a couple of weeks ago so that is the only one done so far.

We have added yet again to our four-legged family members.  But you gotta admit – who could resist this face – 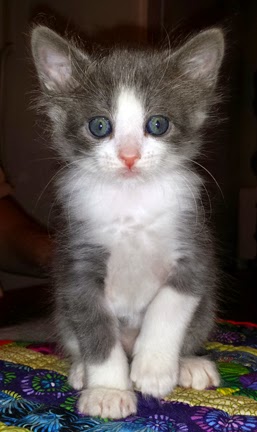 Even my brother Casey could not resist him and immediately claimed him for his own.  His name is Dexter; Mom is saying he was named after a murderer, but since we don’t have HBO or Showtime, or whatever channel that show is on, that doesn’t mean much to me.  But wait – there is more – 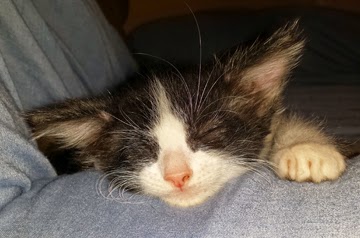 As soon as I saw this little doll face, I wanted to call him Moo.  Mom suggested the spelling Mu, which I was okay with.  Well, this guy is a bit handicapped – when he was not even a week old, he apparently got one of his siblings’ claws in his right eye, and he lost the eye.  Then Casey told me that Mu was a good name, because it stands for Malfunctioning Unit.  After careful consideration, his name was changed to Moe, even though for me it usually comes out MuMoe.  Max loves his new “brothers” very much – 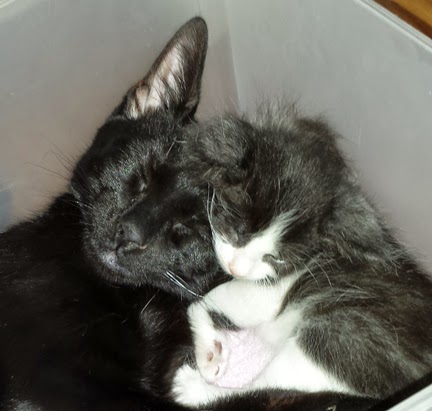 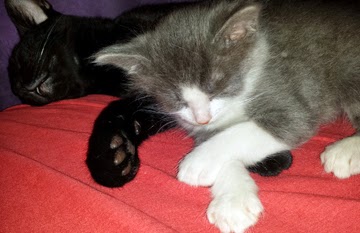 Max gives them baths, cuddles them, sleeps with them, and plays with them, even though sometimes a bit too rough.  It’s good because Max needed a playmate or two; he drives my girls crazy trying to play with them.

Quite some time ago, I had mentioned how I lost an external hard drive containing pictures of my grandkids, past pets, and cruises, among other things.  I have been heartbroken over this for quite some time.  I finally managed to scrape up enough money to get a new external drive, and what it was going to cost me for data recovery.  I had 2 old drives sitting about and couldn’t remember which one I needed to take to a computer shop, so I grabbed one, and plugged it in.  It booted up immediately!  It needed a vacation?  Argh!  Well, at least I saved the cost of recovery by copying it myself.  And it means that I will have some stuff to share in the future.  Another great aspect of this happening is I got my iPod library back – haven’t been able to do any updating for a couple of years now.

I think that is just about my entire summer.  Good news – after trying to get hired by the library since January, it finally happened and I start later this month.  Good thing – I was afraid I would have to quit school if I didn’t get a job soon – what good is a degree in something if you can’t get hired?  Between school, a part time job, and Harry, not sure how much sewing I will be able to get done.  Guess we’ll just have to see.

Hope you had a great summer!  Thanks for stopping by!
Posted by Laura at 6:02 PM