Random Notions – Staying Out of the Sun

It’s warming up outside, even though not as hot as I expected it to be.  Lots of wind is helping.  I don’t go outside unless it is absolutely necessary these days, especially since the AC in my car has died.

Got the kaleidoscope quilt finished.  I have been trying desperately to get a picture where it doesn’t look yellowish, but it just doesn’t seem to be happening.  Honest, the colors are just so much more vibrant than they look in this picture- 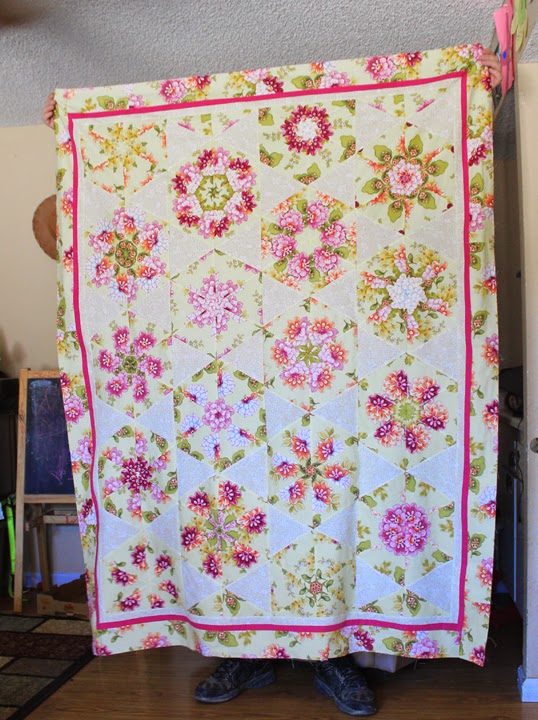 The name finally hit me after I had it all together – Dream Garden.  I’m glad I chose the dark pink to put around it – I first had a dark orange that matched some of the flowers, but I think the pink really was the better color for it.  Just the other day I dropped off another quilt to Janet the longarmer, so when I go to pick it up later this month, I will take this one to her.  That gives me a couple of weeks to figure out what to the put on the back, and if I have enough of that dark pink, I will use it for the binding.

A while back, I shared a project made from a charm pack of batiks.  I have it all together, but for some reason, it just isn’t speaking to me- 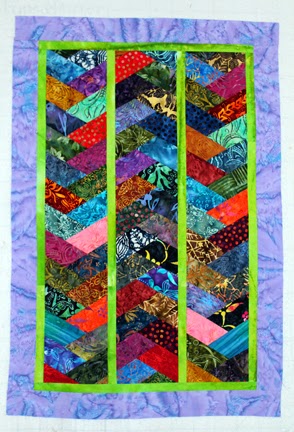 I don’t know if it needs something else or if the green borders are throwing me off.  The green really does jump out at you, doesn’t it?  I probably need to change the purple border to something that will tone down the green. I think it is going to sit on the shelf for a while and I will take it down to look at it every once in a while to see if some sort of inspiration will strike.

There are so many things I want to make, so many piles of fabric waiting for me to get to them, but after staring at another charm pack I got a while back, I decided I needed to do something with them.  Here are the different fabrics from the pack – 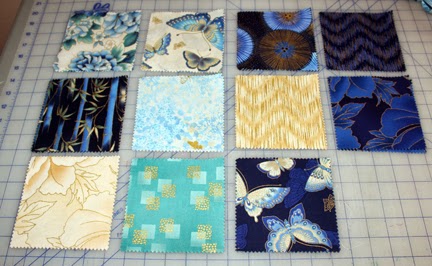 The turquoise fabric really throws me off – it doesn’t really match any of the others!  For over a month I was trying to figure out what I wanted to do with them.  I went through many magazines and websites, and realized that one design I saw over and over again that I really like are the quilts with all the circles.  So I used the cardboard on the back of the pack to make a circular template that gave me the least amount of waste, and started tracing it onto fusible interfacing.

This project could not have come at a better time.  Last month, I was in a thrift store where I found 3 pieces of interfacing – each was pretty long and imprinted for ease in making specific quilts.  They were a mess – whoever put them on a hanger could have cared less that they were dragging on the floor. There were 2 pieces of this one – 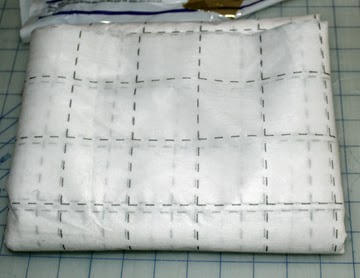 These pieces are for making a bargello or watercolor quilt.  Before folding them up neatly like this, I measured and found them both to be 48” wide, and over 7 yards long! The other one was marked for making an orange peel quilt – 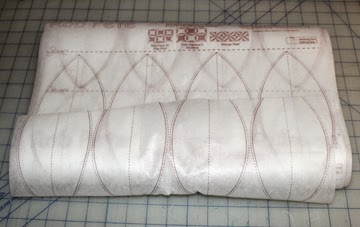 I had to cut about 5 feet off one end of this one, because it had gotten filthy while hitting the floor.  But even cutting off that much, it was still a bit over 18 yards long and 16” wide.  This one has a copyright date of 1999 on it, so I tested it before using it, and it still adheres probably better than some of the newer stuff I have!  Best part – each piece was only $3.  Holy cow, I don’t think I will have to buy light to medium weight interfacing for the rest of my life!

For the past 2 days, I have been making circles and putting them onto a white with small leaves pattern background fabric.  Here are the first ones I have done- They are far from perfectly round, but I am really liking them.  Since all the fabrics have a gold element to them, I am using a thread as close to a gold that I already had and using a stitch I like to call chicken tracks to applique them on – 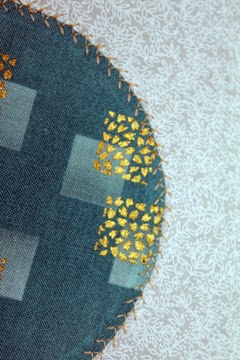 I love applique and I really need to do more of it.  I am going really slowly to try to get it looking nice.  Good thing about that is it takes up a lot of my time that otherwise I would probably be using to take a nap.

This past week Layla has really been working hard on her quilt and got all her nine patch blocks together.  We put it up on the wall and it looks awesome, but I can’t show you a picture – she wants to start her own crafting blog and be the first to show it.  I will link to it when I get permission.  LOL

And that’s just about it.  Just staying inside to sew and stay cool.  That will probably be my agenda for the next 3 months.

Thanks for stopping by!
Posted by Laura at 9:38 PM