On Friday, I got the call that Janet was finished with the green and brown kaleidoscope quilt.  Yesterday I started putting the binding on.  I used the machine to attach it to the front, but then I sewed it by hand to the back.  It has been a very long time since I did so much hand sewing and I really enjoyed it – even if I did have a headache afterwards.  I would love to start cross stitching again – I know I would enjoy it immensely.  I just have to get some new glasses!


Anyway, here is the finished quilt- 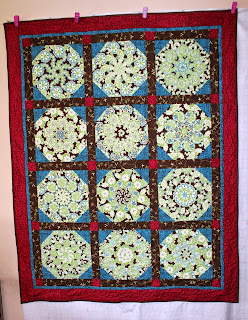 And I love the material I found for the back – 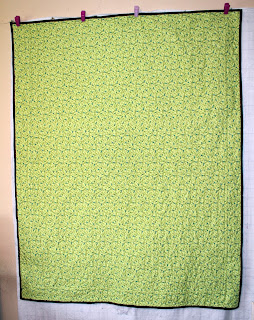 The funny thing is that when I bought this, I was just drawn to the green – it was only after hanging it up I realized that it has the same teal as I used on the front – 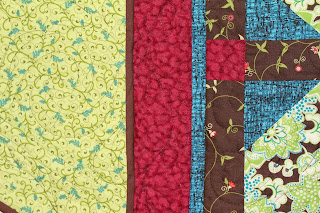 I’ve had a few serendipitous things happening lately – this is one more I can add to the list!  You can kind of see the quilting that Janet did – 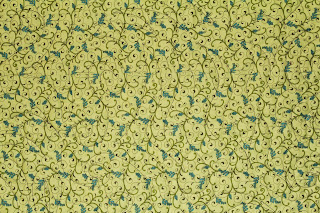 Well, maybe you can’t see it that well, but take my word for it, it looks great!  I think Alexis is going to like it.

I also started quilting the BOM quilt for Layla.  I just wanted to do some simple echo quilting around the colored shapes.  The first couple I did looked horrid – the back was all screwy.  And I couldn’t figure out why it wasn’t feeding through very well, and I was using a walking foot.  Then I realized that the front of the foot wasn’t moving very well – somehow, I managed to twist it out of place and I don’t know if it is a permanent problem.  Thankfully I have another walking foot that as soon as I started using it, everything looked much better.  So I am off to work on that some more, and after that one, I will attempt to quilt the fishbowl quilt for Harry.

Thanks for stopping by!
Posted by Laura at 3:54 PM