Random Notions – The chair is done… for now

Remember the chair I showed you the last time I was here? 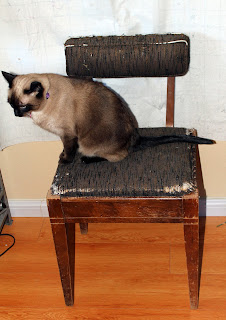 It’s done!  Well, at least for the time being.  I really wanted to get it done, so I took it downstairs to my brother Casey to ask him to help me- I have no upper body strength having been a button pusher for most of my life, so I knew I would have trouble with the pulling of the fabric around to staple it down.

Something I should explain about my brothers and how I learned to handle them over the years.  Whenever I just asked either one of them to do something for me when they had time, I found out it would take weeks, months, sometimes years to get done.  One day, I discovered a nifty little trick – I found that if I asked them to “help” me, it would be done very quickly.  For example, I hate to cook and when my older brother Kelly was alive, all I had to do was say to him something like, “I have to go check on my laundry- will you watch this (whatever was in the pan on the stove) for me?”  I could disappear and come back half an hour later and he would have finished it.  It works with everything!  I know, it’s sneaky, but I finally starting getting some things done that wouldn’t have otherwise!  LOL


So I knew if I went down to Casey with the chair and asked his help, it would get done.  In fact, I have to give him credit for most of the project!  He got the seat done immediately- 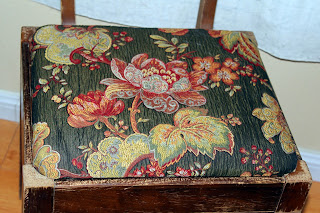 I was very impressed with how he got the flower centered.  He also got the piece on the back of the back done quickly (sorry no photo of that).  However, then it was my turn.  I had to recreate the front piece of the back.  I measured the one I took off very carefully, but of course, I should have added a lot more to the measurements because it was really tight putting it on.  I had to make a run to Joann’s to get piping – that stuff sure is expensive!  I should have re-padded it- the padding on both the back and the seat was made up of layers of some sort of batting-

You can see how flat it is on the sides so it came out that way.  It was so tight, getting it on was really hard (again, many thanks to Casey!), but as I was running out of materials, neither one of us wanted to start over. And since it was my first time with piping, I didn’t do that great of a job on it-

And here is the entire chair- 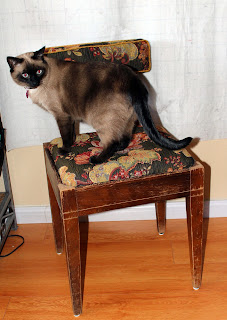 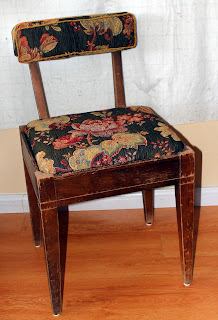 But we got it done.  I learned a lot about making that boxy shape for the top, which is good because I know I will want to change it in a year or so. (I found some gorgeous crinkled purple velvet that would look awesome!)  THAT is why I could never get a tattoo – I like to change stuff around too often. Mix it up, you know?  Keep life fresh! 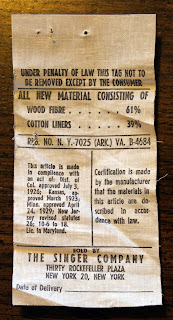 You will notice that the address does not have a zip code, so that means it has be to pre-1963, as the post office started using them that year.  I don’t think the chair will ever be worth a lot except to me so I think I will refinish it next time.  But I did save all of the stuff that was taken off, just in case.

Okay – off to clean and sew (work on the Fishbowl quilt) and enjoy my small-child-free weekend!  Thanks for stopping by!
Posted by Laura at 12:31 PM