I’m back!  Remember the blue kaleidoscope quilt I was working on that I said was a special gift, but I couldn’t reveal the details quite yet?  Well, it is finished and has been given to- my mom!  Today is her 81st birthday!

I got the entire top finished and stressed out about getting it all quilted, when I remembered I had the phone number of a long arm quilter here in town.  I called her up and even though she said she was booked solid, when I told her it was for my mom’s 81st birthday, she took pity on me and said she would work it into her busy schedule.  Her name is Janet and I love her – she is a wonderful lady!

When Janet asked me how I wanted it quilted, I didn’t know – I’ve never had anything machine quilted before and didn’t really know about any options.  She suggested an all over design and when she showed me a template for something called “Angels Wings” I knew it would be great, because to me, it looks like butterflies flitting about!  Here is the back side quilted (before binding)– 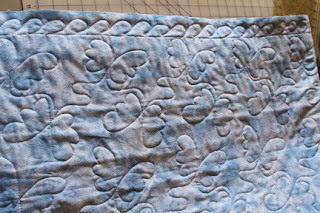 The addition of that little wave along the edge was a great touch.  The thread on the back matched the blue of the fabric.  On the front, she used a royal blue that popped out on the white- 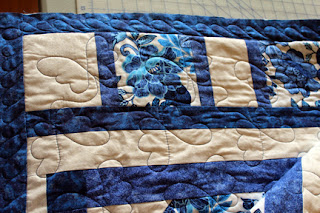 I love how she did it.  I just used a purchased dark blue for the binding and here it is finished, with the pillow, spread out – 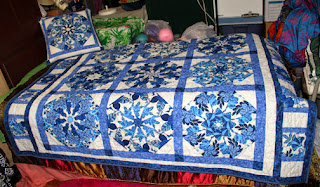 I had added those ends with fussy cut flowers to give it some length, because just the 9 blocks made it too square and more of a lap quilt.

Mom was really surprised when I gave it to her.  She was so happy that it was blue and white – she said for the last few weeks she had been thinking about getting rid of the browns, oranges and reds of the old quilt you can see peeking from underneath – it was just too dark for her room and she had been using it for so many years.

This is the largest quilt I have ever made that is actually finished- what a tremendous feeling that is!  When I picked it up from Janet, I took her another piece – the Ecstasy wall hanging I made almost two years ago.  I have been dying to get that finished because it is my favorite.  When I pick that one up, I will take the first kaleidoscope quilt I made that I promised to Alexis.

Janet is fabulous – and she does not charge an arm and a leg for her work.  If anyone out there is looking for a great longarmer at reasonable prices, please contact me here and I will give you her phone number, I just do not want to post it online.  I believe she does work for out of town quilters, as when I was there last, she had a beautiful quilt on her frame from a quilter in Georgia.

I am just so excited about getting some things finished – it’s quite inspiring!  At Janet’s prices, I actually stand a chance of reducing my “needs quilting” pile of so I can just focus on making new stuff!

So I am off to make an outer space quilt for my friend Linda’s 7 year old grandson.  Like the quilts I made for his two little sisters, I will put fleece on the back and tie it – I found the cutest outer space fleece for the back.  I will have some pictures of it soon.

Thanks for stopping by and have a super day!
Posted by Laura at 10:43 AM 4 comments:

Random Notions – Trying to emerge from a funk

I have just been so depressed the past couple of weeks.  I don’t know why, maybe it’s just the way the heat affects me.  But there have been a couple of things to stress me out lately-

Almost two weeks ago my car started acting weird – it died a couple of times on me in traffic and then it starting giving off a terrible gas smell.  I didn’t drive it for over a week because I was afraid to, and I was waiting til I could dig up some money to have it looked at.  In addition to the gas smell, I needed an oil change and the brakes needed work desperately.  It turned out that the charcoal canister that filters the gas needed replacing- it is supposed to weigh only 4 pounds, but mine weighed between 10 and 12.  To fix this, they had to completely remove the gas tank, and wouldn’t you know, I had filled the tank the day the problem started.  This alone was hugely expensive, and I had to do some quick thinking to come up with the required $1300 to have everything taken care of.  But, for a ten year old vehicle, it is running fabulously now.  It hurt to pay that much, but I keep reminding myself I would much rather pay $1300 once a year plus my cheap liability-only insurance than shell out $4000 - $6000 for payments plus ridiculously expensive total-coverage insurance for around $1500 - $2000 a year.  This car only has 120k miles on it and I want to hit 200k - 250k before I consider a new one- I love this car.  It has given me 10 great years so far and I may be greedy, but I want at least 10 more!

Driving to pick Layla and her friend up from school as the weather was heating up really beat me down.  The school is almost 8 miles from home, and then it was about 13 miles to take Layla’s friend home, and then about 8 miles back home.  This trip 5 days a week in the afternoon was really taking a toll as it was getting hot- I would be in the car for about 2 hours every day, and when I looked at my face in the mirror, I was so red, I looked like I was about to have a heart attack – and this is with air conditioning in the car.  All I wanted to do when I would finally get home was lay down for about 3 hours with the fan on.  I am so grateful school is out for summer.

I was stressing out about getting the blue kaleidoscope quilt finished because I wanted it for a gift soon- I found a lovely lady who does long arm quilting and she doesn’t charge an arm and a leg.  And even though she was booked solid through July, because my quilt was to be a gift and I needed it soon, she took pity on me and said she would do it in time for me.  I ran to her house while she was having a garage sale last week and got to see her longarm machine- it is totally awesome and now I really want one!   She has a two-car garage that the frame barely fit into – it was about 3 feet from the wall where she has shelves with all the to-do projects sitting and then cleared the garage door by about 1 foot – just enough room to move around it.  I can’t wait to see the quilt when she is finished.

I don’t know if it is just the terrible twos, but Harry has been a bit more obnoxious lately than before.  He has been really whiny and tired and I wonder if the heat is also affecting him.  This past week with Layla home he has been hitting, spitting, and throwing things something terrible.  I hope it is just a phase that will soon pass- he was always so good before, I want my old Harry back!


And very sad- we had to put our 12 year old St. Bernard Chloe down.  That is really old for a St. Bernard, as about 8 – 10 years is more the average.  She was so sweet, but she had gotten to a point where she could no longer get up on her own, and she couldn’t stand long once she was up.  We all miss her very much. 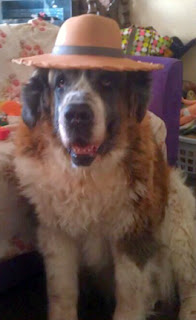 The last couple of weeks haven’t been totally bad.  I got to watch an online presentation for the university I want to attend for my Masters degree starting in January.  I am even more excited about getting that started now.  However, even though the classes I will attend are online, I still have to go to an on-campus orientation meeting in December – if I don’t go, they will not let me in the program.  So thanks to the few excess funds from my current student financial aid, I was able to book the flight and hotel for that trip.  That has me a little pumped right now.  I am also happy that my current history class has only a couple of days left and then I get a week break.

A few days ago, I tried starting another small wall hanging.  I was looking at these fabulous polka dot fabrics that I got at Hancock’s – I was getting one yard at a time every couple of weeks, just because I am so in love with them-

This is just 6 of the colors they come in- there is also pink, another brighter green, another darker blue, black, gray, brown, and tan- there could be more but that is all I can think of right now.  From the moment I saw them, I knew I wanted to make a rainbow out of them.  I was looking through all my blues, and thought that the fabric I had for the back of the blue kaleidoscope quilt would work because I wanted a cloudy type effect- 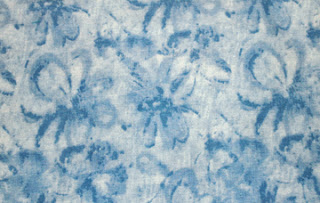 I loved this when I first saw it, because I was seeing butterflies in it.  It wasn’t until I got home I started seeing spiders in it too!  Oh well, it is really pretty fabric.  However, I started questioning my choice when I started putting it together.

Whenever I need something quick to work on to lift my spirits, I start in on one of those quick quarter quilts that I first saw Eleanor Burns do.  Fast, easy, and I (almost) always love the results.  When I laid the strips out, I saw that the blue sky fabric was a bit too dark- 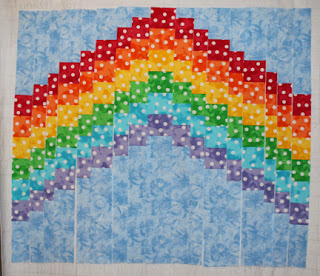 I can live with it, and I have already decided I am going to see how some appliquéd green along the bottom and sides, like rolling hills, will look.  However, I was annoyed because I hadn’t thought of how angular it would look- I needed to cut wider strips.  I also needed to start with the blue on top of the red in the middle.  Oh well, live and learn, right?  I have more of all these fabrics if I wanted to try it again.  I have most of this part together, I only need to sew on a couple more strips and then I can work on the appliquéd bottom and sides.