I was beginning to think I would never get to say that!  I have so much respect for people that design bags now – and this was just really very simple!  From the beginning, I knew I was going to have a few issues in making my own pattern- that is why I didn’t chronicle it as a project.  I wound up taking out so much stuff, but I did learn quite a few things along the way that I would do differently next time – and there will be a next time, I’m just not sure when I will be ready for it.

So this is how it came out- 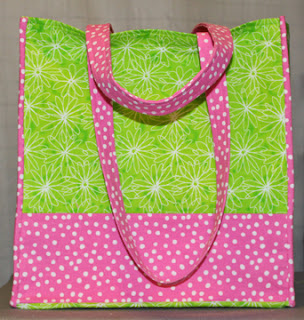 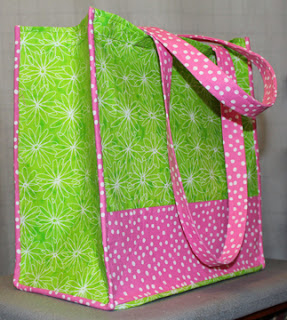 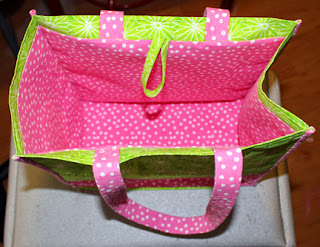 That little loop on the inside is for hanging it up- 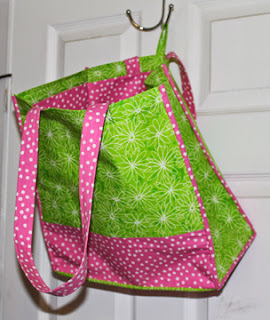 Okay, as I looked at it, it was missing something.  I wasn’t really happy with the Xs of stitching on the outside where I attached the straps because my stitching is not always that straight, so I knew if I put something there, I would be a lot happier with it.  I hit upon the idea of buttons, and after searching through my button stash, I came upon these felt flower buttons I had bought to use on the shower curtain rings in my bathroom a couple of years ago, along with some tiny star buttons-

I sewed them together first and then attached them- if Linda doesn’t like them, she could always snip them off and maybe hot glue something else in their place.  They didn’t exactly totally cover the Xs, but I think they are cute and kind of give the bag a little something extra- 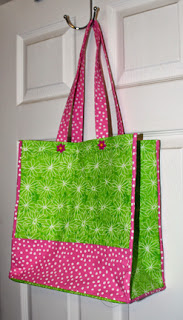 Linda says she just wants to carry the towels she uses at work in it – I would have to say that since this is the first time I have tried to make a larger tote bag without a pattern, towels would probably be fine, but I wouldn’t recommend trying to haul books around in it! LOL

Linda, Mom wants another trim, so I will contact you to set up another appointment in the next week or so and I will deliver not only her, but your bag!

Wow, so glad to have that done – now I can work on my history essays for school tonight without thinking about the bag the entire time!  Linda, I hope you like it!
Posted by Laura at 11:25 AM