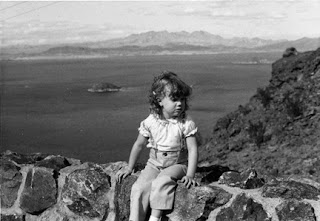 Today was my baby’s birthday.  She is now 34 – sorry, Lex, if you were trying to keep that a secret.  How could my baby get so old so fast?  On her 21st birthday, I took the day off from work and dragged her all over town to play bingo- I think we hit at least five bingo halls.  Her very first game at Sunset Station, she won $100, and then later in the day at Texas Station, she won again- I think a couple more hundred.  That was a great day.  We have since kind of made it a tradition to play bingo on her birthday, which every year makes me sad to think it is pretty much the only day of the year I get to play, when I love to play!  Today we went to Arizona Charlie’s to play the 9 am session – I had not been there since I worked at the Aladdin and we used to get off at midnight and go over there to catch the 1 am game – and I left the Aladdin in November of ’97!  It is so much nicer than it used to be- I remember it as a very small room filled to the brim with smokers, which made it pretty miserable.  We went there because it was the closest 1 am game for us when we got off work – closer bingo halls ran on the even hours and we didn’t want to wait around for a 2 am game.

Taking Alexis out gambling on her 21st birthday was something I had had to do because of my grandmother- when I turned 21, Grandma told me to pick her up at 7 pm, and off we went to the Showboat that used to be located on Boulder Highway – gosh I miss that place!  I have many fond memories of hanging out in the bowling alley while my folks were playing on the leagues, and I loved the coffee shop – best club sandwich ever!  Grandma loved playing live keno, and she was really good at it- she won a lot.  She played about a dozen way tickets every game and they came up for her all the time.  I remember that day on my birthday, when she handed me a twenty and told me to play whatever I wanted- back then, we didn’t have penny machines and the poker machines were all quarters and dollars, so I would play one quarter a hand.  A twenty could last me about 45 minutes to an hour.  Then I would go back to keno, where Grandma had hit more money, and she would hand me another twenty.  She did not want to leave until about 4 am.  I was beat- considering how far I had to drive after I finally took her home, it’s a wonder I stayed awake long enough to get myself home safely!

So I had high hopes for Lex today, but the closest she got was being one number away from a win for about 8 draws when another player on an electronic unit won – those things have totally destroyed the fun of bingo.  These people play zillions of cards so paper players don’t normally stand a chance of winning any more- not one winner today was on paper.  That really sucks.

Tonight, Alexis’ wonderful husband, Mike, took her to dinner and to see George Lopez at the Mirage.  I decided that the kids and I could have a movie night, but Harry asked if we could watch The Brady Bunch instead – or as he calls them, The Brainy Bunch.  Layla was willing, so we watched five classic episodes and then they were off to bed.

I thought I would come in before I went to bed to share the 13 blocks I made out of the Springs Creative material.  From this- 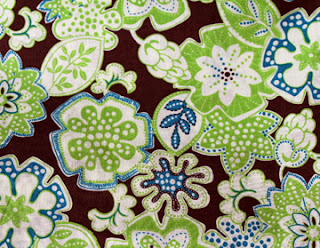 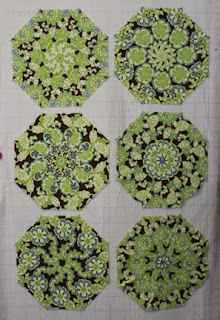 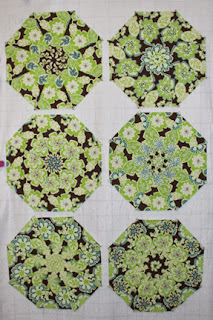 I love how they all came out so different.  I can’t believe how quickly they went together – and they are probably the best piecing I have ever done in my life.  No idea how that happened!  LOL

Now I just have to make some corners for them all to make them square.  I found a really pretty piece of teal fabric that matches beautifully, just hoping I have enough.  Perhaps tomorrow I will get time to try to do that.

Happy birthday, Lexis Shell!  I love you lots!
Posted by Laura at 10:34 PM