Last night, I just could not go to sleep thinking about the borders for the yellow and black wall hanging, so I put a narrow black one on.  It made it look so much more dramatic with the black border- 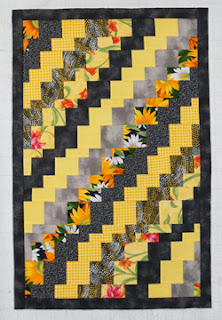 Then, I thought I would really like a wider border, probably around 2 ½” of yellow around the outside.  I auditioned all the yellow fabrics I used that I still have enough of, but I didn’t like any of them.  Today I wound up using that funky black and yellow stuff and I think it looks pretty good- 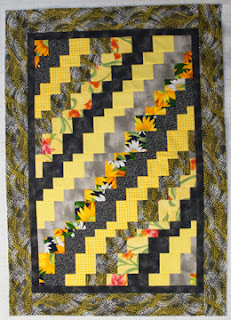 So this is another one for the “Needs Quilting” pile.  I sat staring at it up on the wall for a long time, and it started to remind me of bees, so I think I will call it, Plight of the Bumblebee.  Why Plight you may ask?  Well, I keep reading about the bee population dwindling around the world- the gray made me think of them fading away.

I have to say again, I love this method of making a quilt – you can make it any size with any number of fabrics and the best part is if you are careful to always make sure you iron all your seam allowances to the same side, when you sew the final strips together, all the seams are going in the same direction and you don’t get one rucking up on you- here is a small part of the back- 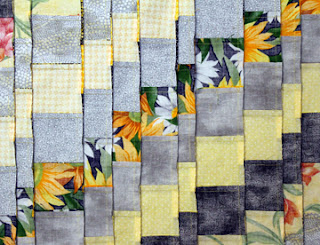 I think this is awesome because I am forever taking out a small section where a seam allowance has flipped up!  This was the fifth quilt top I have made like this- here are pictures of the others-

This one was made for my daughter’s niece, so I named it Chrissy- it was actually completely finished because I tied it- it’s nice and fluffy! 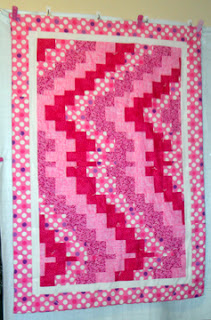 This was made from batik fabrics I bought on a trip to Alaska, hence the name, Alaska Adventure.  I just put a black strip between each row and lined them up straight across – rather than cutting each color block to stagger them. 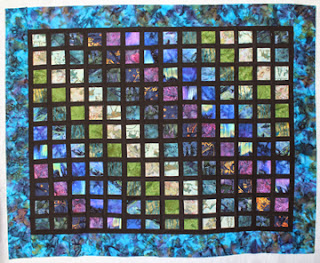 This was the second one I did, just something to do for fun – I call it Down on the Farm because I was trying to get the idea of a landscape.  I was just using stuff from the stash, so I was a little limited in how I could build the ground up to the sky- 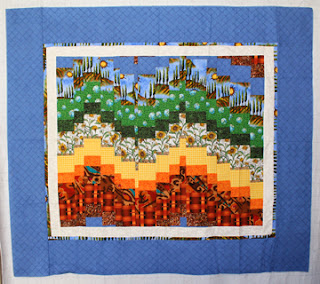 Not exactly what I was thinking of, but it was a lot of fun to put together.  Also- that narrow border between the white and the blue is actually a folded border and sticks up slightly– I had never done that before, so I wanted to give it a try- I like how it looks.

Finally, my favorite is the first Quick Quarter Quilt I made- it’s my favorite because the colors are just so incredible – I call it Ecstasy because it just gives me such a great all over feeling- 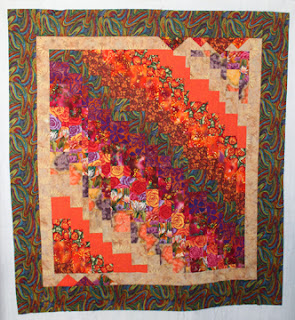 I put the prairie points on it at the border just because I had never done that before either, and I love the way it came out!

The Alaska Adventure, Down on the Farm, and Ecstasy are still waiting to be quilted so you can probably understand why I need to learn how to machine quilt!  LOL

If you haven’t tried this kind of quilt, try it!  There is no going wrong and you will love what you get!

Okay – I mentioned Baby Quilt up there at the top.  I am so excited because I am going to make a baby quilt for a dear friend’s granddaughter who was born last month!  She had a first granddaughter born in September of 2011 that I made a quilt for, which took me forever, but I am bound and determined that this one will be done quickly!  This is the first one, called Harley’s Butterflies- 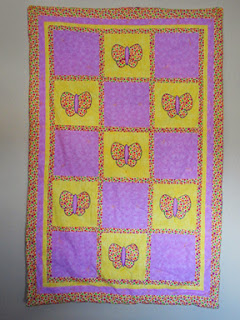 And there is a matching pillow, where you can see the block better- 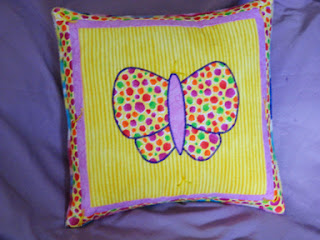 These were finished, because I tied them as well.  These also have fleece on the back, which makes them really snuggly.  So whatever I make for the new baby will also be tied with fleece on the back.  I have to do some looking around to figure out what it’s going to be.  This one will definitely go much quicker than the first.

Better run off to write a history paper. <sigh>  Only one week left in this class, and then four more classes, and I will be a kol-edge grat-che-ate!  October cannot get here fast enough for me!
Posted by Laura at 6:13 PM