Random Notions – It really is H*LL getting old!

I think my daughter and her kids were trying to kill me or at the very least, put me out of commission for the last couple of days.  After the fun the kids had on Wednesday at McKee Ranch, Alexis, who took Thursday and Friday off, decided she wanted to take them again on Thursday.  Both days, after getting home, I was exhausted and fell asleep as soon as I lay on the bed.  So then yesterday, Friday, Alexis wanted to go to take the kids to this really neat little park we had passed on the way to the ranch.  We spent about an hour or so there- they had a blast- 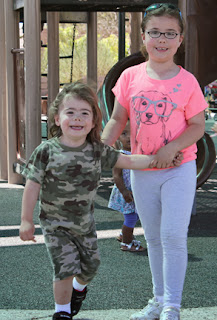 After eating, we went to the Bass Pro Shop at the Silverton Casino, to see all the stuffed animals – I hate that – and with the hope of seeing the mermaid in the giant aquarium located between the store and the casino.  We lucked out- the mermaid was there.  Harry was so thrilled because he loves mermaids - Lex got an awesome picture- 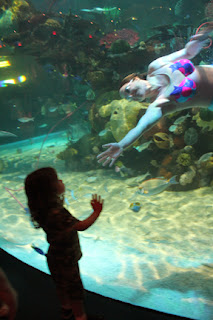 I had never seen her before – I didn’t even know they had a little show with a mermaid.  By the time we got home, about four hours later, again I was beat.  Am I just getting old?  How will I ever get through another day at Disneyland or an even worse thought – DisneyWorld and Epcot?  I really need to lose weight so that I can drag my old body around for longer periods of time!

They aren’t ironed here, but the parts I have been working on that have been ironed look really “fabu” together!  Linda, I hope you like them – you said bright green and pink- and they are brighter in person than in the photo. 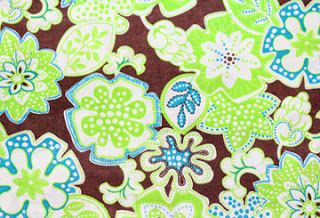 It really is pretty.  I have an idea of what to do with it that could be really cool.  I have to wash it before I can use it.  Everything has to be washed before I can use it because I’m allergic to the finishes and starches used on new fabrics.  I usually sneeze like crazy if I am in a fabric store too long- it can be miserable!

The April block is up on my block of the month class.  It’s a fan block so there is some curved piecing.  I think I am going to put that together this evening.  It should go pretty fast and I will still have time to work on Linda’s tote bag.  I thought I should get some waxed paper to help with the piecing – that isn’t something we usually have in our house so I had to run to the store real quick.  Does anyone still use waxed paper besides quilters?

Off to sew!  Happy Easter to everyone!
Posted by Laura at 5:11 PM