Today was a really nice rainy day, enhanced by lunch with my best buddy, Rebecca with whom I rarely get to spend time.  We were going to a Mexican restaurant that when we got there, we found out was closed!  We were both so disappointed – I hadn’t been there for a few months and Rebecca had never been there, so we had both really been looking forward to it.  We wound up going to an old standby favorite Mexican restaurant instead, which was great, but we were still disappointed!

I made more geese when I got home – nothing new to really show – trying to figure out how many more I will need at this point.

I can finally show the change purses I made the other day – they were all made for other people and I didn’t want to spoil any surprises.

First, for my cousin Frances who loves elephants, I had promised to make two more change purses exactly like the one I had made for her a couple of months ago.  She belongs to an elephant collector’s club and a couple of the other collectors wanted them.

While I was resizing that picture in PhotoShop, Harry came running in – he looked at the screen and yelled “Cousin Frankie!”  Every time he sees an elephant, he associates it with her – kids are so funny!

And then for my dear friend and college buddy Chrystal (The Hobby Horse), I made these- 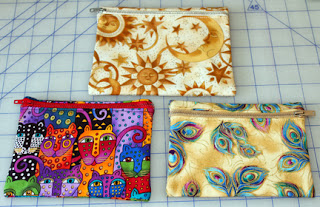 I almost couldn’t part with the peacock feather one – it really is a gorgeous piece of material and thankfully I have enough left to make one for myself out of it.  I made three because Chrystal has two lovely daughters and I figured she may want to share with them, but I told her she could keep all three for herself if she wanted.  LOL!  However it turns out she is a great mom and wound up giving the moon/stars to her older daughter and the cats to her younger daughter, while keeping the peacock one for herself.  I’m so glad they all three liked what they got- I really lucked out with the fabric choices.

And that was it for today.  Not much, but at least I feel like I got something accomplished!
Posted by Laura at 7:28 PM