Random Notions – Anyone want to buy a spool of thread?

Last night and today I made some geese.  I am so glad I decided to do these, because my Block of the Month sampler quilt will be including some later on in the year – I think around October.  I found out something very important about the goose- if you cut into it accidently, which, believe me is very possible, you can cut it down to another size to avoid where you accidently cut!  This is what I have so far- 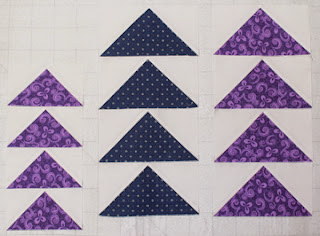 I want to make four of each color in each size.  There will be more colors as I pull them out, too, but I will probably use the white background on all of them so the colors pop out.  At this point, I have no idea what I will do with them, but I really like them.

The ones I made last night I used the expensive Italian thread to put together.  I had nothing but trouble with that thread- no matter how I try to adjust the tension or switch needles, the stitching I get with it looks terrible.  My machine just doesn’t like it.  (just like me, my machine requires only the simple, CHEAP things in life!)  I change to a spool of the Essentials, and the stitching is showroom perfect!  (And no, I am not paid to say that!) I know there are lots of people out there that love the Italian stuff – I will probably try to sell it on Etsy or ebay – I have used very little of it, so it would be a deal for someone and maybe I could recoup some of my loss.  This is what it looks like – 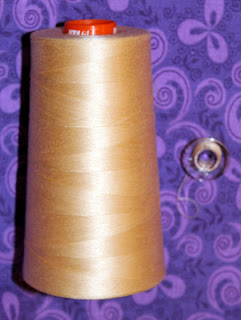 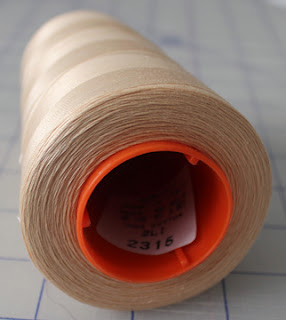 I will post it on one of those sites next week, unless someone who reads this would like to buy it for $25 which will include shipping.  I paid $30 plus shipping for it.  This was a 6,452 yard spool - believe me, I have used far less than $5 plus shipping worth of thread off of the spool – I half-filled the bobbin once for my two attempts to try it, and there is still at least 1/3 of what I put on the bobbin left, and I will include the bobbin.  I had hoped to be able to wind it off onto smaller spools, but that isn’t going to happen now.  Here is a link to a site that sells it for $30 a spool, and you can see the color more clearly – it is a great neutral color:  Cone of thread

If anyone is interested in purchasing it, please just email me at:

siamesecatqueen at gmail dot com
(leave out the spaces and change the at and dot to symbols – I’m trying to avoid the bots and their spam!)

I can accept Paypal (not at the above email address), but if no one wants it by next Monday, I will be listing it for sale on Etsy or ebay.