I’m still alive – kind of – and wanted to check in.  This has just been crazy.  I have never been sick like this in my life.  My bronchitis, or cold, or flu, or whatever it is, has settled into my throat – painfully.  At first, it was just at the top of my throat and when I took a look, it was really red.  I could barely swallow, and sleeping was next to impossible.  Well, now it is moving down my throat – it is more like in the area where the indent is at the base of my throat on my chest.  It is not quite as painful, but it does still hurt and is causing a wheezing cough that does not produce anything.  My voice is gone most of the time.  I have been really tired- walking up the stairs wears me out so I try to make fewer trips.   It has been suggested to me that these are sometimes symptoms of walking pneumonia.  Great.  That’s just what I need.  Hopefully I will get my tax refund by next week and I can go back to the doctor.

I came into the computer/sewing room this morning to try to clean up a few things – I hate leaving stuff out for the girls to sleep on.  Example: 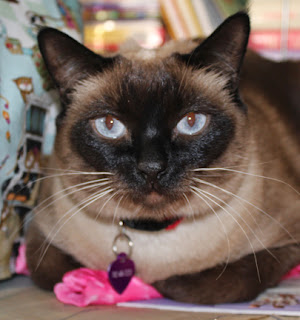 A few weeks ago I had gotten a couple of remnants at Jo-Ann’s, so I needed to overcast the cut edges so they could be washed and put away.  (Ha ha – put away – more like folded nicely and put on top of the pile!)  I was switching out the thread before I started, and realized, the machine was really linty and dusty, so I took the plate off to clean it.  I started using the little brush that came with the machine, and thought, wow, I need to take the bobbin case out – it’s terrible in there.  As soon as it was off, I tried to brush down inside and I could not believe the stuff that came out!  I had cleaned it out as far as the bobbin case before, but I had never gone that deep- it was awful.  I really want to take this machine to the same place I got the serger cleaned up at, I just need to get ahead $$$-wise.  It did sew beautifully after I put it all back together, though!

The other day, my darling daughter, Alexis, told me I have to make another bag for her.  If you go back to my posts on The Alexis Bag, you will see that when I made the first bag for her, she kept telling me it was too big.  Now – she wants something bigger.  I just stared at her.  She wants something like a tote bag, so she can carry her tablet in it.  That is what I thought she wanted to do with the first one, but no, she kept saying it was too big.  Kids.  I guess another bag for her is the next project.

My friend Rebecca just got back from a two week cruise from Los Angeles to Hawaii and back- I am so envious!  She got some terrific pictures – even a video of a whale breeching.  Cruising is my favorite way to travel and I am constantly looking at what is coming up out there.  One I would love to take is a repositioning from LA up to Vancouver, BC, Canada in May.  I have done one like that before, but this one stops at Astoria, Oregon, which is someplace I really want to go- I love Oregon and have never been to Astoria.  I need to win the lottery or something so I can just live on a cruise ship.

Okay, so there isn’t much else to share, except – Saturday (Feb 23) I will put up a post for another giveaway – another great piece of fabric, this time St. Patrick’s Day themed, and a pattern – and winner announced the following Wednesday (Feb 27).  Here is a sneak peak at the fabric: 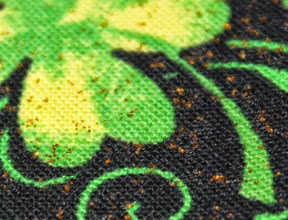 I hope you will come back then and post a comment to get in the running!
Posted by Laura at 6:06 PM