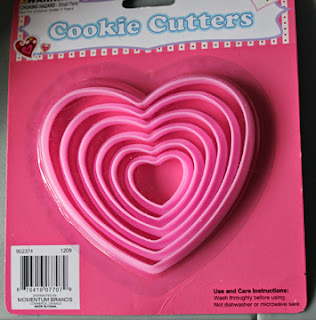 They are a rather cheap plastic but I think they will work well to make some heart appliqués- I love that there are so many sizes.  I figured if I just traced around them onto interfacing and then sew the interfacing to the fabric, I would get some fairly straight hearts.  I don’t do well freehand.  Might have to go back and see what other kinds of cookie cutters they have there.  Stars would be nice.

I slept very well last night – that may account for the weird burst of energy I had this morning.  Looking around, I found many little things I had been procrastinating on getting done.  One of them was putting away some laundry.  Sometimes, I am really dense.  I use IKEA shopping bags for laundry – so much easier to carry up and down stairs than a basket.  One had been sitting on the floor that I thought was full of sheets and a blanket that needed to be folded.  Who likes to fold sheets and blankets?  Not me – I left them, thinking I would get to them eventually!  So I started pulling out sheets one at a time, then the blanket.  What do I find underneath- a bunch of shirts and pajamas I have been missing for a couple of weeks.  As Bugs Bunny used to say, “Whadda maroon!”

I really need to stop my procrastination.  I would have included that in my goals on the first of this month, but as I found out, as soon as I say I’m not going to do something, I want to do it all that much more.  For instance, I said I wouldn’t buy more fabric, but since saying it, I am obsessing and want to buy more.  Maybe I should try reverse psychology and say I’m not going to attempt to lose weight this year.  Hmmm... it’s a thought.

Tomorrow I am going to make the third sewing machine cover.  Looking over my stash, I was having a hard time deciding what fabric to use.  Then I spotted this- 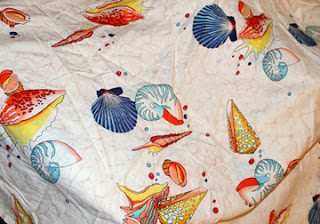 This is a circle skirt I started to make years ago, probably in the mid-80s! When I saw the size of the skirt, I was so embarrassed – it’s huge!  I just quietly folded it up and put it away.  There’s a ton of yardage in it so I have plenty to make a cover- heck, I could probably make a tent for Harry to play in!  LOL

So tomorrow, I will finally have that third cover made!  YAY!  And I’m very happy I got some other stuff accomplished today!  That’s a good thing.
Posted by Laura at 4:59 PM