It seems like everything I do, I have to do twice.  That’s one reason I am sharing this with the world – I hope someone can learn from my mistakes.

The only magnetic snap I could find at Michael’s was gold – good thing – but the prongs have to go through the side of the bag.  I did not want it to show on the inside of the finished bag, so I had to reopen the hole in the lining so I could get to the inside of the main body.  I’m glad I did that sewing with the machine and know that it will be easy to re-sew.

I was also grateful that I hadn’t yet sewn the strap ends down on the D rings – I sure didn’t need the extra bulk in my way.

I looked on the snap packaging for directions and it says: “To apply, follow your purse pattern instructions.”  My pattern just said to attach a magnetic snap.  <gee, thanks>  I looked the pieces over and thought, surely this can’t be too hard.  They come with washers to put over the prongs on the wrong sides of the fabric – this is just one half of it- 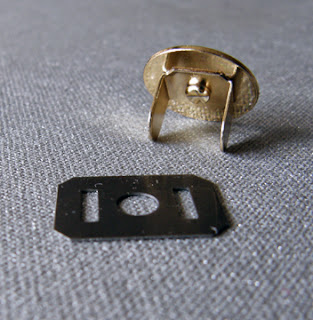 I wondered if I should push the prongs out from the center or to the center.  I went online to find a couple of clues.  I’m glad I looked first.   All the sites I looked at said to push the prongs in.  Also, it is a good idea to cut a piece of heavy interfacing to put between the fabric and the washer.

My bag has heavy interfacing and padding on the side – I was thinking more interfacing probably wasn’t so necessary, but I was afraid of fraying, so after I marked where to make the slits for the prongs, gently cut them through, and pushed the prongs through, I covered the spot with Fray Check.  Quite liberally.  I love this stuff- it saved me many headaches when I was cross stitching, not just to coat the edges of my fabric with, but if I made a mistake that got cut too close.  I put the washer down over the prongs and pushed them over to the center. 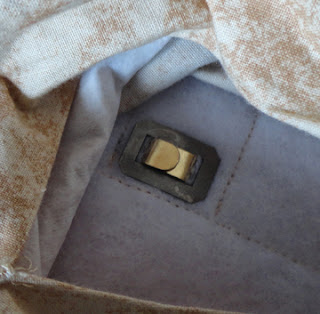 And it looked fine on the outside- 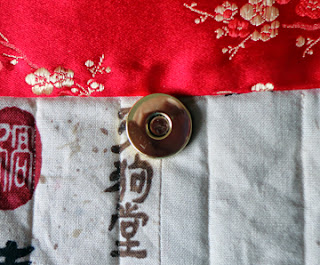 I did not want to put the snap through the brocade – that stuff has already been enough trouble- I don’t think I will ever use it again!  If anyone else like working with the stuff, I will be putting it up for sale on Etsy!

At this point, I did not know what I should do.  I wish I had known that there are sew in magnetic snaps available, because had I been thinking, that is what I would have bought – I would have searched until I found one!  I got the one on the body okay, but the flap is a different matter.  There is topstitching on the flap, so I cannot easily open it up to put the snap in from the inside.  This means that the washer and prongs will be exposed on the top of the flap - I will be putting my large red button over where it would be, but it will make it sit high above the flap in an odd manner.   It doesn’t look like I have any choice- I mean the button would be sitting higher anyway even if the snap back were hidden under the fabric.  Argh – to get all this way and encounter this!

My solution- I went ahead and put the snap on the flap, and my beautiful red button, I turned over – it has an interesting brown back, and the browns match some of the browns in the materials.  Since it is concave, by turning it over, it covered over the snap back quite well and doesn’t sit up high.  I used twine to attach it- I actually took a couple of stitches between the prongs of the snap before I put the washer on- then I pulled the twine through the hole in the center of the washer (see picture above) and then I put the washer on and pushed the prongs down.  I pulled the two ends of the twine through the holes in the button, tied it a few times, then thread it back through the button holes, and tied it several times under the button.  It feels quite secure.  Then I took more twine, pulled it under the button and tied it, and added beads – I did that three times.  I’m trying to decide if the beads are overkill, but I think I like them.

I also created a small zipper pull for the pocket inside – the tab on that zipper is so small!  I know I need to tighten up that jump ring or this may not last too long. 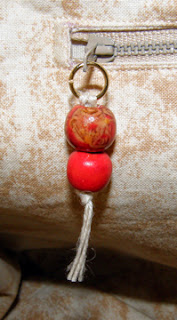 So with the strap sewn on, the Rooster Bag is finished- 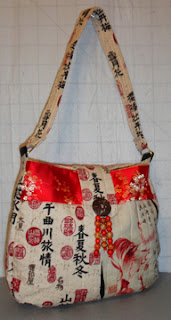 The more I look at it, the more I like the button on the brown side.  I really like this pattern – the bag is really deep and roomy.

Well, what have I learned from my journey with the rooster?  For one thing, I don’t like working with brocade – and this is really sad because I just found a remnant at Jo-Ann’s of beautiful dragon-covered brocade!  I don’t know what I am going to do with it now!

I like that the construction of this bag was so different from the Hippie Bag – I have some ideas for a bag of my own design eventually and I like knowing there are different ways to do different things, like the lining.  I loved finding out the pocket was so simple.  Really nice thing- I am getting better with the pins and poked myself a bit less this time around.

So what’s next?  Well, my daughter, Alexis, has told me I have to make a bag for her.  She says she already told me what pattern she likes, she just needs to decide on the fabric, but I swear she left it with “I’ll think about it later.”  Lex, if you’re reading this, you need to decide pretty darn quick!