After many, many episodes of Frasier, I think I am done with the white shelves.  I mostly removed stuff that didn’t have anything to do with sewing, and will box it all up to set aside elsewhere. <Hahaha - like I have an “elsewhere” to put it!>  This is the after picture- it doesn’t look that much different from the before, but I am pretty happy with it- 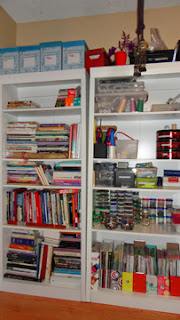 The stuff I need most often is now at arm’s reach.  By clearing out most of the non-sewing related stuff, I was able to put in my beading stuff – I love beads for embellishments and I was really tired of hauling stuff out of the closet every time I needed something.  I still have room for more beading stuff, which I have stuffed in a box, so I can put it all in one place.  Wow, I got a lotta stuff.

So that’s the good news – the bad news is the room is so torn apart, I’m not sure how long it will take to get it together so I can sew again!  I have 4 children-free days as the kids go to California to celebrate New Year’s, and I was hoping to be able to sew in peace while they were gone.  I guess tomorrow will be spent trying to get it together.

If anyone is really out there and has suggestions on organizing interfacing, I could really use some help with it!