As I was starting today, I noticed that I had apparently tried to put a border on this wall hanging all those years ago- there were stitch holes from where something was removed.  My first thought was I hope I am not doing the same thing I tried all those years ago and wound up hating it and getting frustrated.  After all, that is what I used to do!

I hung the top up on my wall to look it over and decide what it needed.  First off, I wanted to harness in all the white background.  Since I had followed an order with the colors of the blocks, I decided to go with that, putting narrow strips on each side (they will be ½” finished), using the color that was on that side of the blocks- does that make sense?   You can see what I mean in the pictures.  I also left the strips long and only sewed to ¼” of the white edges, so I could miter the corners. 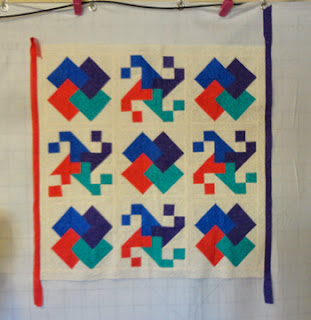 (What looks black on the right side is actually a very pretty deep purple.) 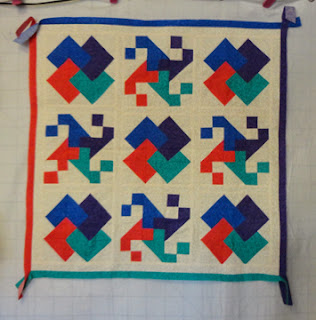 It has been a very long time since I mitered a corner, so it took some time to figure it out.  I finally got there, only having to take one out and re-do, and I don’t think they look too bad. 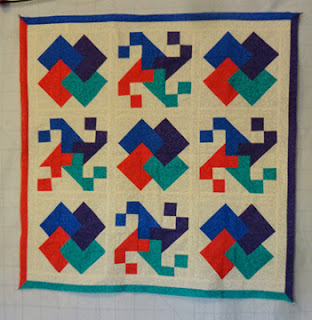 Now it is time to make the piano keys.  I have never done this before, so I’m not too sure about the mathematics of them.  The top is currently approximately 27 ½” square.  Sewing 1 ½” strips of the colors together in the same clockwise order of color, I got a 4 ½” wide strip.

I then cut it into 4 ½” increments, which I laid against the top in a couple of ways to see what I liked best- 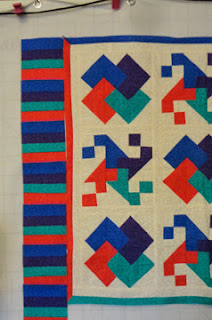 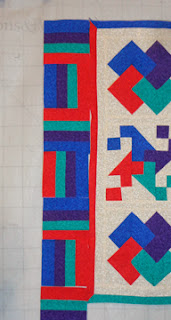 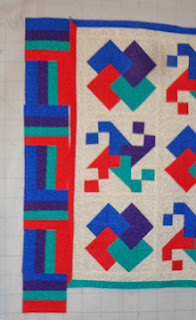 Even though I like all three, I think I will go with plain old piano keys, the first one.

Because of the math involved, I will have to take a couple of keys out here and there to make it fit proper, and in the corners, I am going to make 4-patch cornerstones.  I have to get the top and bottom “keyboards” on before I can attach the sides with the cornerstones.  Here is how the first one looks: 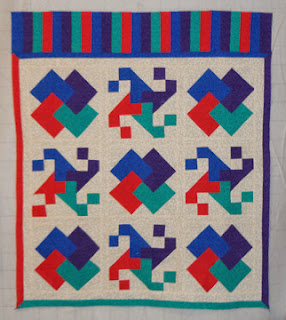 So I will just spend some time putting these together.  Tomorrow, I will figure out the cornerstones.
Posted by Laura at 10:30 PM