Wow, already the last day of 2012.  It’s unbelievable that another year has passed so quickly.   Of course, it didn’t seem all that quick while it was happening- it’s kind of like you just wake up one day and it’s over.

I spent the morning bringing stuff back in from the hallway.  I have to say, once that extra desk is dismantled and removed, it’s going to be really nice in here.  So, what to do?

I really wanted to get the last 2 changes purses made, but I couldn’t decide what fabrics to use.  I finally just reached into the zippers and pulled out 2 – figuring I would base the fabric choices on the zippers.  Here is what I pulled out-

Orange!  I LOVE orange!  Next to purple, orange is my favorite color!  And this made me think of a tiny piece of orange batik I couldn’t bear to throw away- this is a game changer – I need 2 more purses for gifts, but now I have to make the orange one for me! (Selfish, aren’t I? LOL)  So, I added another zipper- 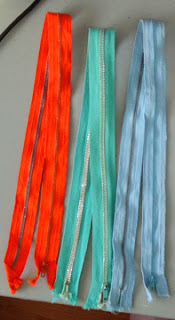 At least I decided to make the one for me last!  J

The green one was first – found some pretty stylized flower fabric, along with a dark mottled green lining- 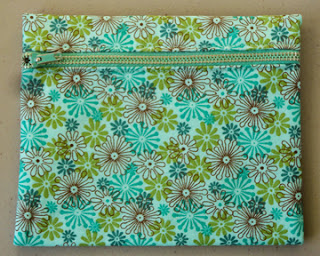 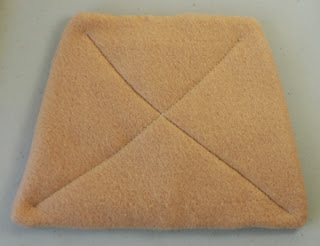 Okay, so what is it?  To explain, we have an almost 12 year old St. Bernard named Chloe.  She is definitely showing her age.  Last year, she developed a fatty tumor on her back near her neck.  My brother, Casey, took her to the vet and had it removed, but it has grown back, and bigger, plus the hair around it that was shaved to take it off previously has not grown back.  It is really icky looking.  She will be going back to the vet to have it removed again if the vet thinks she will survive another surgery (12 is pretty old for a St. Bernard), but in the meantime, Casey is trying to cover it up because it is just so gross- especially when she shows up at the dinner table begging for food, and she is at the right height for it to be the first thing you see when she comes up under your arm.  Casey is going to attach this to her collar.  He had made one before out of duct tape, but because she has no hair there, it was irritating her skin.  Here is the finished product- 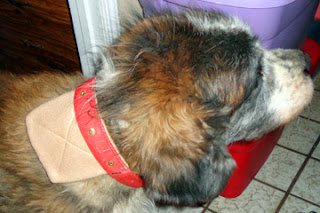 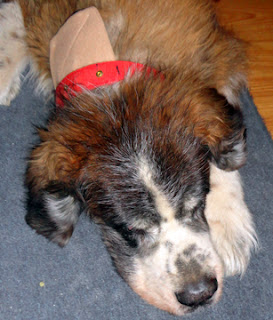 It doesn’t look too bad and she seems happier than when it was duct tape!

Okay, so back to the change purses! 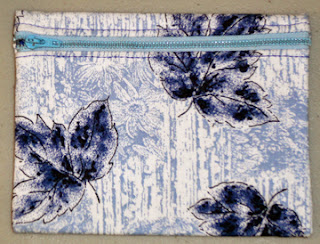 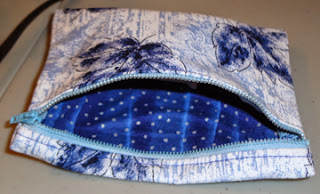 And finally the orange – 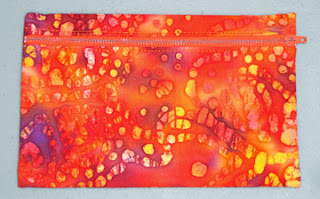 This orange batik is delicious – there is no other way to describe it!  It was a fat quarter I got at Jo-Ann’s and I will have to see if I can get more.

So with this being the end of the year, I started reflecting back.  I started this blog on November 16.  I wasn’t too sure when I started if I could keep it up, but this is post #46 – I haven’t missed a day since the first.  That is amazing- I have never kept on with something so well before in my life.  (I actually started it on a different blogging site and had to move it over a couple of days after I started- if I had stayed on that site, I wouldn’t still be doing it.)

I have never claimed to be great at crafting or sewing - I’m one of those people knowledgeable enough to be dangerous at many things.  But I do try to always be enthusiastic.

These last 46 days have been more productive for me than the last 10 years.  20 years.  Heck, probably even farther back than that.  For the first time in my life, I have been setting goals and working toward achieving them.  I have finished more projects in 46 days than ever before.  The feeling you get when you finish something is incredible – a feeling I haven’t known all that often before.   I LIKE IT!

I want to feel this way all the time.  Since I started blogging, I have not been as depressed – I am cutting my anti-depressants in half and I feel great!  I wake up in the morning and feel I have a purpose in life, even if it is to feed my own ego writing about my own life.  I am excited to get on the sewing machine, have the camera ready, and the computer on.  The frustration is quite often still there, but I haven’t given up.

Clearing out the sewing/computer room really helped me – I looked at so much stuff and honestly asked myself – am I REALLY ever going to do anything with that?  I’m talking about stuff I have had for a very long time that was causing massive guilt for letting it sit so long.  A lot of stuff went to a thrift store or the trash.

I hate to be cliché and come up with New Year’s resolutions, but there are a couple of things I would like to be able to say I have accomplished by the end of 2013:


So Happy New Year to everyone!  I hope you will visit here often in 2013 - I am going to try a couple of giveaways in the next couple of weeks!
Posted by Laura at 7:28 PM