Note - this was originally published a few days ago on crabbybitch.posterous.com.  I found that to be the most user UNfriendly blog site ever so I have moved over here.
November 16, 2012
Crabby bitch.  Yep, that would be me.  I could blame it on all the crap going on in my life for the last few years, but I know the real underlying problem is that I have all this creativity in my bones and I have trouble getting it out.  Most of my time is spent surfing the net, reading blogs and watching videos of other people being creative and making the coolest stuff, and I want to do it, too!  Why don't I do it?  Mainly because I have been too lazy - there is always something on the DVR for me to watch - and because I lack the required self-esteem to believe that I can do it.
I love to sew.  My mom taught me how to use her sewing machine when I was 7.  I tried making clothes, but I was never happy with the way things came out.  It was amazing when I was in Home Economics in high school that I actually made a dress I liked and wore a few times.  But since then, I don't think I have ever worn anything I made.  When my daughter was little, I made her a few things that came out kind of cute and I put them on her, but stuff for me just never worked out.
I started quilting back in '92, but a lack of space made me put it all away after a year or so.  I picked it up again in the last couple of years and have made a few quilt tops, but so far, not much more than a couple of baby quilts have been finished- I tied those and they were gifts I had to finish, and the others I would love to machine quilt, but for some reason, I'm afraid of the mess I would make, because the quilt tops look pretty good!  A big problem is if I screw something up, I get frustrated and put it away so hardly anything has ever gotten finished.  Then I get mad at myself for never getting anything done.
Of course, not finishing anything has never stopped me from buying fabric.  I have a considerable stash since I have been buying the stuff since the late 70's.  I love going to thrift stores to buy clothing that I just know would recycle into some cool stuff.  Most of my older stash has been in a storage unit for a couple of years, and I frequently pray to the Textile Gods that it is still okay.
In addition, over the years I have attempted many other different creative venues - polymer clay, beads, painting- among many others - but what have I got to show for it?  Closets full of stuff that hardly ever or never got used!  I know I am not alone - I read about others like me all the time!
So, why am I here?  After seeing all the great videos and blogs of all the creative, wonderful artists out there, I thought maybe if I committed myself to something publicly, I would get it done.  Of course, there is a huge possibility that no one will ever see this, but by publishing this on the internet- the biggest public forum in the history of the world- I am opening myself up to ridicule, but also the possibility that maybe I will get some positive feedback and support from others like myself.
Okay, so what project to start?  Well, for the past two years I have been collecting purse patterns.  I hate the purse I have been carrying – it’s actually just a tote bag I bought to take on a trip with me and I have just been too lazy to buy or make something new.
I went though all my patterns and finally decided upon this one- McCall’s M6045, from Kay Whitt Design. I really like View B, with the contrasting top and bottom (black and white in upper left corner). 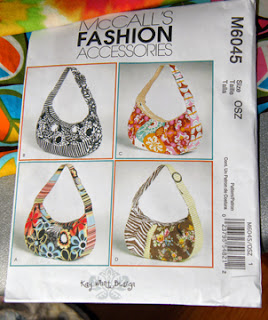 When I bought this pattern, I really hadn’t paid much attention to the designer; I just thought the bags were really cute.  A month or two later, I found the most spectacular book called Sew Serendipity Bags, and it turned out it was also by Kay Whitt.  Awesome book – I really recommend it!
Okay, I love the black and white of the sample, but right now, because I am in such a funk, I decided I needed to make it bright.  I have some pieces in my stash that I know are going to be really cute- 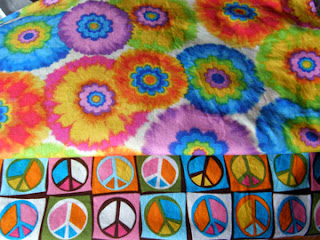 The flowers will be the top half of the purse, and the peace signs the bottom.  I was a teenager in the 70’s so these really appealed to me.  I have no idea as to the designer of the flowers as it looks like I, or someone else, cut the selvage off –I get so much fabric from thrift stores.  The peace signs I actually bought in a fabric store, and it is called “Flower Child” D#8561 by Robert Kaufman.  I like my purse strap to be a bit longer, so I will be adding a few inches to it.
Well, I think that is enough for my first post.  I am going to get onto the ironing and cutting and figuring out what is what – I will take lots of pictures.  If anyone is out there, please say hello, and if it looks like I am screwing something up, suggestions are welcome!  Thanks for stopping by!