The Hippie Bag - Day 4 and It's Together!

Sewing was a bit challenging this morning because of babysitting my grandson Harry, age 2.  I had to put the iron away from his reach when I wasn’t using it, so there was a lot of back and forth to the bathroom to hide it, and a lot of waiting for it to warm up each time I plugged it back in.


Yesterday I had the body of the bag together except for the gusset for the bottom and sides.  The gusset is one long piece that fits around the sides and bottom and I wanted to use the peace signs material and get an entire row of the signs centered around.  I knew if I cut it on the fold, the signs would be upside down on one side.  So instead of cutting it on the fold, I centered it on the peace signs, cutting just half of it at a time, leaving a bit extra to sew it together. 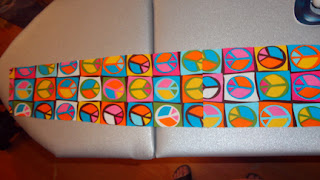 After I put it together with the interfacing and lining, it needed to be stay stitched, and I top stitched that bottom seam. 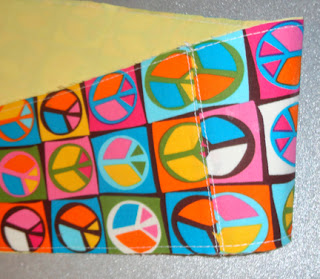 Sewing on the gusset was tricky – at this point, I had 9 layers of fabric and interfacing.  But my plucky Athena was able to do it- I love this machine! 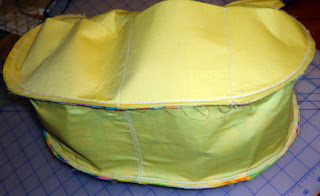 This bag is much larger than I originally thought it would be, but I’m happy about that – more room to carry my junk around! 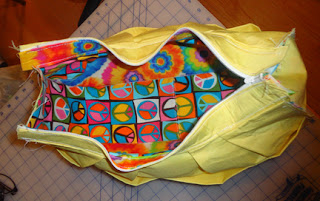 To finish the seams on the inside, bias bindings are used.  Rather than try to cut out that long piece of fabric on the bias, I just measured the pattern piece and cut it out with my rotary cutter.  Much straighter and accurate than had I had scissors in hand!  When I ironed the pieces, I used a light spray of starch to give them a little body. 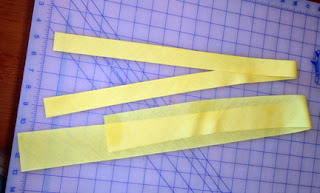 Sewing the binding on the first side adds another 2 layers, making 11.  After putting the gusset on, I had to trim the seam to ¼”.  That gave me the brainy idea to use my quilting ¼” foot with the bar to stop the fabric from moving over.  Worked like a charm!
I decided to hand stitch the other side of the binding, so as not to screw up that nice seam.  I rather like it with the binding on the seams- nice polished look to it. 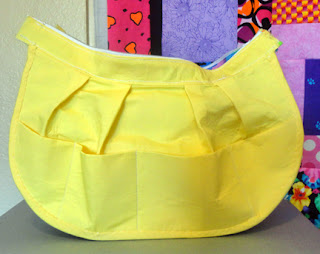 I enjoyed the hand stitching – Harry took a nap for a couple of hours so it was nice to be able to sit quietly and do it.  I used to cross stitch a lot – it was my passion for over 20 years until my eyesight starting getting so bad.  Someday, I hope to get a new pair of glasses and be able to take it up again- I really miss it.
I turned the bag right side out and pulled out a few basting threads that were left – I think it is looking good! 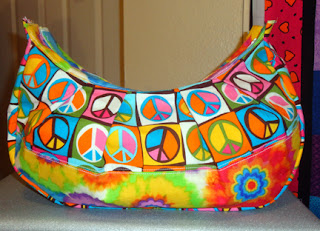 Next came basting the top at the sides to the gusset where the strap ends will attach- I didn’t realize until I saw this picture that I didn’t use the same stitch length twice!  LOL

The strap – the very last part!  The long part of the strap is originally 18.25” and the smaller section is 8.5” – the pattern calls for adjusting it to the desired length.  Based on my own personal preferences, I lengthened the long part by 9” – I like a long strap on my purse.  To do that, I cut a straight line across the narrow part of the pattern piece and then added 9” of paper, making it same width, and taping it together.  Note – don’t iron a pattern piece that you have used tape on. <slaps forehead>

I decided to make the strap out of the flower material.  The directions call for interfacing all the strap pieces – I only interfaced one piece of each section. 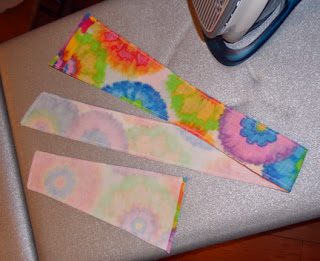 After sewing around them and leaving the wide end open, I had to turn them.  Thankfully, not too long ago I bought a set of those straw and dowl fabric tube turners, so it wasn’t as difficult as I thought it would be.  I ironed them out and attached the one raw edge to the bag where the top meets the gusset, then flipped the ironed up side of the strap end over the raw edges of the top/gusset.  (Hope that makes sense!)  Then a little hand sewing to slip stitch that folded side down to the side of the bag.  Topstitching around the strap sections, and it’s pretty much finished! 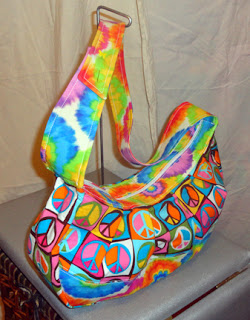 I am trying to decide how I want to connect the two strap ends (where it is pinned)- either with a button hole and large button, or just sew it together with some sort of embellishment, probably something with beads.  I have already decided to make a zipper pull with beads.
I love the inside – there are four pockets on both sides. 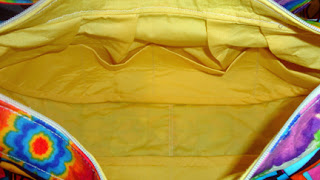 This has been an incredible experience for me.  By sharing what I was doing, I had to slow down, make sure I was doing it right, and take pictures. It’s amazing that I made it in just four days!  Sometime this week, depending on how energetic Harry is, I will be making the zipper pull and putting the strap sections together.  Will post photos as soon as I have that done!
I hope that in some way I can inspire someone else to give this a try – it really is a lot of fun.  Thanks for stopping by!