November 18, 2012
I was up by 7 this morning and working by 7:30 – did not have breakfast first nor even need my coffee before I got started!  However, after an hour and a half, I did have to take a break as I was getting a bit shaky.
I have had this yellow cotton in my stash for a long time.  Don’t know what I was thinking when I bought it, because I have about 4 yards of it.  It’s a nice lightweight weave, so I thought it would be great for the lining, especially since my two “fashion” fabrics have so much yellow in them. 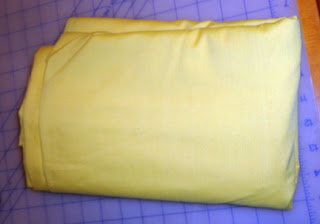 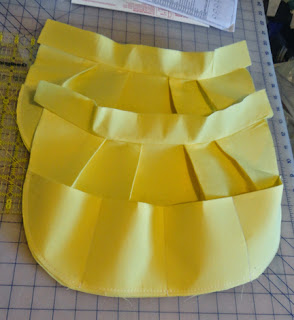 Of course, I had to backtrack at this point – I forgot to trim my seam allowances!  Argh!  Oh well, done and moving on!
The zipper is one of the most terrifying aspects of sewing.  And even more scary- sewing machine zipper feet don’t usually look like what they did when I first learned to sew!  Well, I’m sure they have been changed for the better, right?
I bought a white zipper because of all the white in the main fabrics, but now I’m sorry I didn’t go with yellow.  But- I did not know I was going to be using a yellow lining until after I bought the zipper.  I had to shorten the zipper – started with a 14” but had to cut down a little less than an inch.
Basting the zipper in wasn’t too hard, and I managed to find a zipper foot to fit my machine that was more along the lines of what I am familiar with.  When it came to adding the lining and stitching the zipper down, I wound up having to take the first couple of inches out and re-sewing them- my needle position wasn’t over quite far enough and I didn’t figure that out until I had sewn a bit.  I have had this machine – a Singer Athena for almost 4 years and there is so much I still don’t know about it.  It is the first electronic machine I have ever owned, or stitched with.  But after a couple of adjustments, the first half of the zipper looks great!
I also learned something by this- I have always hated trying to get around the pull of the zipper – I always wound up with a curve around where it was sitting.  After watching countless sewing videos, I now know it is easier if you sew with the zipper closed or open for a few inches, then move the pull up past where you have already sewn.  Thank you to all the brilliant sewers out there! 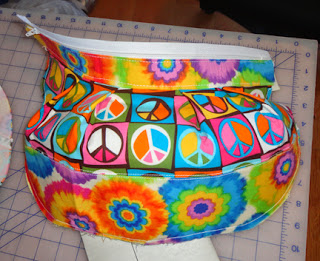 It was at this point, I screwed up.  I saw “topstitch along long edges of top” so I started topstitching.  I skipped the step about basting the lining to the side piece, so I had to take out a row of really good topstitching- thankfully I hadn’t started the other side!
Something I did realize in time – when putting the side lining together with the top lining, it says to do it the same as with the front and back to the top.  In that part of the directions, it says to press the seam allowance toward the top.  I realized that by pressing the seam allowance on the lining pieces, it was going to make it really bulky where I had to top stitch.  I opted to press the lining seam allowance toward the bottom, so it locked together like when piecing a quilt.
Putting the second side on the zipper presented a challenge to my sensibilities.  The directions say to add the second piece just like the first, but they do not mention that when you “put right sides together” you are sandwiching the first half between the second.  Took some thought, but problem solved! 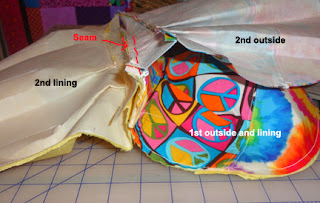 The topstitching becomes even more difficult at this point because of all the layers.  I would really recommend using a lighter weight interfacing on the lining, and possible even using half as much on the pockets – use interfacing that is fusible on both sides and cut one piece in half and just put on one half of each pocket and then fold over.
So the top part of the purse body is together! 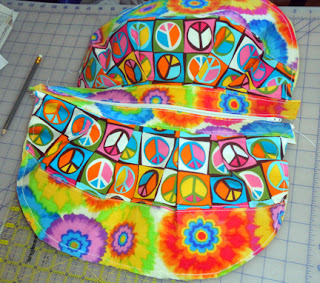 I can’t believe I am already at this point – the first time I tried to make this purse I didn’t get past cutting out some of the pieces- I was just too intimidated!  I am really happy with the way it is turning out.  Of course, my shoulders are in knots from having to tear out a couple of seams, but I will continue!
Next – the bottom, and the strap and it will be done!