Wow, I never imagined this would be such an inspiring thing to do!  I actually woke up this morning ready to work on this project – it is amazing what depression can do to you.  Most mornings, I don’t want to get out of bed or take a shower – I might want to eat and have a cup of coffee, but that is as far as my ambition usually gets me.  Today, I wanted to jump into the shower, have breakfast and get started!  Yay!
First off, I found I needed to make a slight change in the cutting of the bag.  I had wanted the peace sign fabric to go along the bottom, but I realized I would barely get one good full row of peace signs on there after taking into account the seam allowances.  So I switched it around, with the signs on top and the flowers on the bottom, but I like it even better! 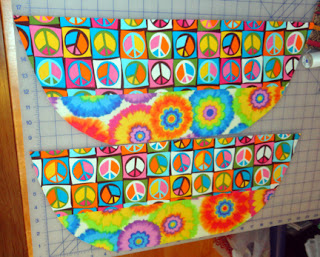 The peace signs make a great “statement” fabric and the flowers are a terrific accent.  Because of this, I am going to do something that I know you aren’t supposed to but, I am going to cut the pieces out as I need them, so I can determine which fabric is going to go where better.
I am using a heavy interfacing, because I want the bag to be able to stand up on its own.  I bought Pellon’s 808 Craft Fuse at Joann’s.  I like how sturdy it feels.  Because I am frequently shaky when I cut fabric- don’t know what I would do without a rotary cutter and a ruler when I quilt – I trimmed the interfacing about 1/16th of an inch all around – I knew it would overlap in places otherwise.
Next was something I dreaded – topstitching along the seam on each side of the two fabrics.  I am not the straightest sewer in the world, but you know what, it doesn’t look that bad! 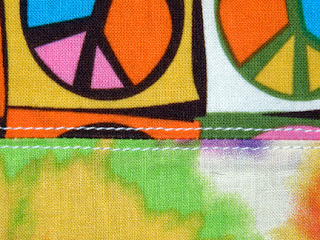 Another thing I wasn’t too sure about – pleats.  I’ve never made very good pleats before, but after basting these, I am happy – not as scary as I thought they would be! 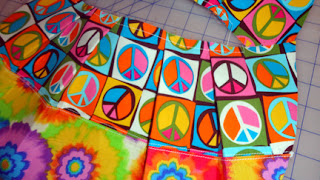 Added the tops to the front and back- I really don’t need to worry about the bag standing up on its own- that is some heavy duty interfacing! 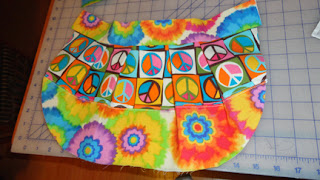 I am actually learning a lot by making this bag in this manner- for one thing, I was always in such a hurry to get anything done, so my cutting, marking and sewing were not that good.  Also – it pays to have the right tools for each job.  And- I need to work with pins more often so I can learn how to get them in and out of the fabric without poking myself!  I rarely use them when quilting, but I have to on this project – I have a lot of sore fingers tonight!
Tomorrow – the lining and the zipper!