Simplicity 2617 - will I never finish this bag?

First thoughts upon awakening this morning – creating a buttoned flap.  Last night, I did not get to bed by 8 as I had hoped.  Instead, I searched frantically for the perfect button for my flap closure.  I was thinking black or gold and large, but I had nothing.  I am a bright color person, so whenever I see buttons I love, they are usually crazy colors.  At 8:15, I ran out the door to go to Jo-Ann’s to look for a button- they are about 8 miles away and they close at 9, so I hurried.

I ran in the store and headed for the button aisle.  As I approached it, from about 15 feet away, I could see the most perfect button – it was big and it was red!  (Since I have commented somewhere previously about my bad eyesight, I should probably clarify about it here – close to my face, everything is a blur, but I have eagle eyes at a distance.)  The button is a 1-9/16” diameter and has a wonderful texture to it.  It was the only one like it and I grabbed it, but I searched through everything else before making up my mind.  I looked at black and gold, but nothing caught my eye like this one.  The red goes well with the fabrics.

This morning I got the lining sewn together – I like the weight of the interfacing. 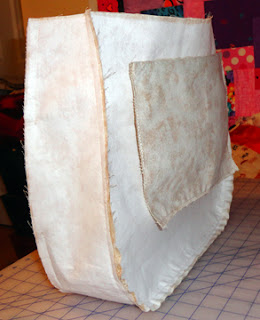 Finished, I want the closure flap to be 6” x 3” so I drafted a rectangle 7” x 4” to account for ½” seam allowances.  I marked the center and then used a cup to create a curve at the bottom. 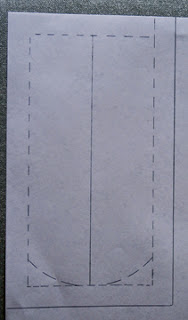 I am going to cut this out with my rotary cutter and ruler – much easier.  I will also only interface one side with the heavyweight interfacing.  I decided to cut the front out of the fabric with all the writing and the back part out of the lining so when the purse is open, the flap will blend with the lining.

I marked the seams on the lining side before I started sewing. 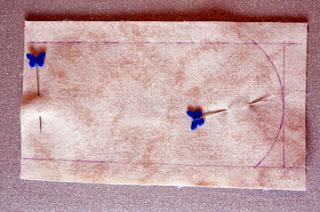 They didn’t look straight in this picture so I remarked them before I sewed!

I got it stitched all the way around when I realized I should have padded it a bit to topstitch it like everything else.  Argh.  I took it out.   Then, to get the padding, I had to move out a table or two to get to the tub where I keep the battings and paddings.  Before I put them back, I took the time to move a couple of things to make it easier to get it out next time.

While basting the padding to the wrong side of lining part of the flap, I realized I was covering the marked lines to sew the seam of the flap, so I had to remark the interfacing side of the other side of the flap.  (wow, it seems like there are a lot of sides involved in that sentence!)  I feel like I am making about 20 times more work for myself!

After all the extra steps, I finally got it sewn, turned and ironed.  Not totally perfect, but probably as perfect as I will ever get close to! 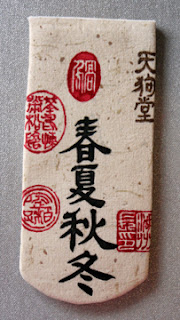 I decided on three lines of top stitching and I centered it by folding and then ¾” from the center on each side.  Of course, I marked them and used the zipper foot because I do much better when I do that.  However, in the case of the last line sewed, the one on the left, I was pretty much off the mark.  It’s okay, I can live with it. 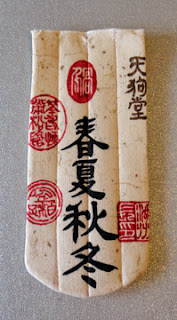 At this point, I’m a bit worried.  I am not at all embarrassed to admit – I am scared to do the button hole.  I have spent my life avoiding patterns that called for button holes.  All morning long I have been telling myself not to worry about the button hole – my machine has a handy-dandy button hole foot- it can do it all by itself, well, almost by itself.  The only problem I foresee is operator-error.  Time to get out the instructional manual and plenty of scrap fabric.

And horror strikes- the buttonhole foot is not big enough for my button!  Ack!   What moron invented a buttonhole foot that is limited to 1” buttons?!?  I don’t sew straight enough to be able to just create my own buttonhole with the zigzag stitch, so my alternative is to use my mother’s non-electronic sewing machine to make a 4-step buttonhole.   So I guess I will stop for the day- I have some class work to do anyway, I was just procrastinating on it as long as I could.  <sigh>