The day started out with a headache.  I had to take Harry to his toddler class, and he wouldn’t eat but half a waffle fro breakfast.  By the time class started at 9, he was a bit fractious.  Good example of how important a good breakfast is!

After class, we went to Wally-World.  When I made the Hippie Bag, I really liked the stiff interfacing I used for the outside- for the lining is another matter.  I decided I wanted to use a lighter interfacing on this one and of course, I didn’t have enough of what I had.  Wally-World was fun.  Harry didn’t want to sit in the kid seat, so I let him sit in the big part of the basket.  The lady was cutting the interfacing and I realized Harry had been awful quiet for awhile.

In my experience, Harry being quiet means he’s either pooping or into something he knows he shouldn’t be.  I look over at him, and he had opened the small tube of hand lotion I was buying and had it all over his hands and legs!  That intensified my headache.  I knew at this point that we would not be looking around at anything else, and we headed for checkout.  When we got into the car, he had a screaming fit because he didn’t like the song playing on the radio.  I thought about turning it up louder to drown him out, but instead I just turned the radio off.

Harry chanted “night, night” all the way home, so I knew he was tired, but I wanted him to eat something first.  Mom was making rice and Foo-Yuk when we got home, which is basically just a sauce with chicken and vegetables in it like a stir fry.  I put a bowl of that in front of the kid and he ate like we had been starving him all this time.  He pulled pieces of broccoli and cauliflower out and would go “Yum, broccoli” and “Yum, cauliflower” and scarf them down.  I am so happy he likes vegetables – his sister won’t usually eat them, much like their mother.

Anyway, I was very happy when he told me he wanted to lie in his bed and watch TV for a little while and then go to sleep.  Of course, being 2, he didn’t say it in quite so many words, but I knew what he wanted.  He watched Max & Ruby for about 20 minutes and then yelled “Lowa, over!”  And he lay right down and went to sleep – what a good kid he is!

Finally – me time!  I cut out the lining pieces for the bag, and the interfacing.  I had wanted something of a medium weight interfacing, but all Wally-World had was heavyweight, super light, or featherweight.  I liked the way the featherweight felt on the bolt, not as light as I thought featherweight should be, so I thought I would try it.

I don’t know about anyone else, but I do not like ironing on interfacing.  I just feel like I am never doing it right, even though I am reading the directions.  It usually says to use a damp pressing cloth- well, I don’t have a real pressing cloth, I have to use a wash cloth, and to keep it damp means I have to keep running into the bathroom to re-wet it.  Today, my brain clicked and I tried something different.  I steam basted around the edges to hold it down to my material, and then I turned it over, lightly sprayed the material with the sprayer from my iron, and then ironed it.  The interfacing went on better than any other time I have tried to do it.  Why hasn’t anyone ever told me this before??!! 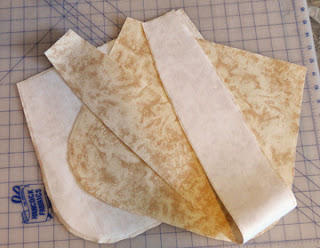 After a break to pick Layla and her friend up from school, I was back, ready to tackle the pocket.  I have never done a pocket like this and I was really confused as to why I was supposed to cut TWO pocket pieces.  The picture on the directions looked like only used ONE.  I decided to go ahead with one and see what happened.

I marked the pocket sewing lines on the back panel lining and on the pocket piece and then pinned them right sides together. 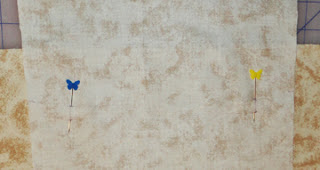 After sewing around the marked lines, which are hard to see in the picture, I cut through the center of the sewn rectangle and angled out to the corners, turned it to the outside of the lining and pressed. 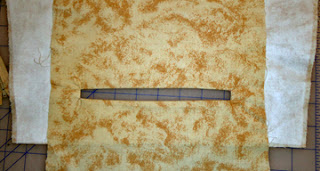 I wasn’t sure if the odd shape was the result of my crooked pinning or crooked ironing.  The zipper had to be centered in the hole – which the crooked hole seemed too big for! 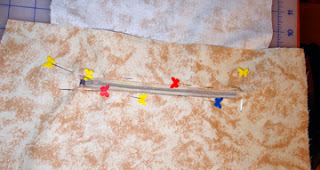 But after sewing around it, I caught in all the sides of the zipper and it looked okay.  Still not seeing where I need the second pocket piece. 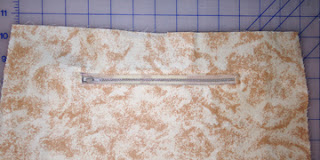 Sorry for such crummy pictures – this material really doesn’t photograph well.  The color doesn’t look right in any of those photos!

To finish the pocket, on the interfacing side of the lining, the piece is just folded in half and sewn around- I also trimmed the seam and zigzagged around to give it a bit more strength. 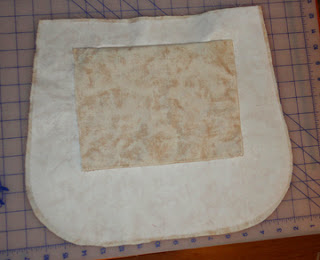 It doesn’t look too bad – and you don’t need that second pocket piece at all.  It lines itself.  Here it is open- 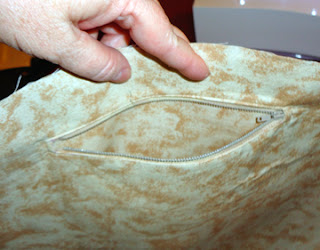 I have to say, that was not as hard as I was imagining.  I’m finding out more and more that it really is pretty easy if you are following the directions closely.

Looking at the next step in the directions, I find that I was wrong about a closure for the bag- it calls for a magnetic snap.  I don’t like magnetic snaps – I have deactivated many debit cards thanks to them, so I think I will still create a flap with a button closure.

So it’s time to sew the lining pieces together.  I was beat from starting my day with a wrestling match with Harry, so I decided to stop there.  Going to do my best to be in my bed by 8 pm, which I don’t do very often.  Maybe I will be able to finish up tomorrow- just need to sew the lining, make a flap with a button hole and then the strap.  Not too much work for one day... I don’t think.  J